Pakistan’s forgotten national sports heroes in boxing, cycling and football who brought glories to the country in Asian Games, Commonwealth Games and other international competitions were honoured at a grand function organised by Sherwani Sports Trust on May 25. 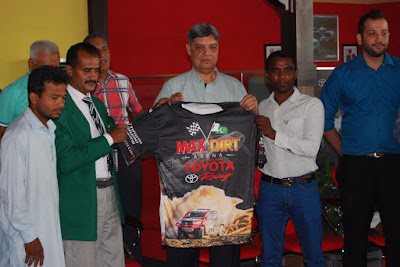 They were also awarded shields and mementos as a token of acknowledgement of their heroic feats Sherwani Motors set a noble example by distributing cash awards worth Rs 200, 000 among the needy sportsmen.

“They may be from the past but continue to be counted as national heroes and deserve respect and support from the nation,” he observed.

He hoped that more organizations will feel their responsibilities towards the neglected heroes in the field of sports and follow this noble gesture demonstrated by Sherwani Sports Trust and assist these poor, needy and jobless sportsmen.

“The basic purpose of holding this program was to support and assist those needy sportsmen, who were neglected despite their achievements for Pakistan,” Shujaat Sherwani, the chairman of the trust, stated.

“We are really honoured with the presence of galaxy of international sportsmen with us. It’s the duty of the society to support these great men, who served the country bringing honor and dignity in international sports arena. It is always a great sight and feeling when Pakistan flag is raised and national anthem is played at the international stage,” he said in an emotional tone.

Shujaat Sherwani also announced scholarships to highly talented boys and girls, specially from Lyari who may show bright prospects for the country in coming months.

Describing the assistance extended as meager token assistance for financially distressed sportsmen, Shujaat said our dream is that Pakistan should regain its lost glory in hockey and other sports in Asian Games and Olympics.

Shujaat Sherwani pointed out that in order to achieve the cherished objective he was also running a free cricket academy and hockey club and staged Motorsports Really in Hub and Nooriabad in recent months.

Speaking on the occasion Justice (Rtd) Zafar Sherwani, who was the guest of honour, expressed his delighted to be standing among the heroes of the country, reckoning that sports can play a vital role in the development of youth of the nation.

Justice Zafar expressed dismay that Pakistan once a great sporting nation of the continent failed to win a single medal in Muslim Solidarity Games held in Baku where small host nation Azerbaijan emerged on the top.

On the occasion Meherullah and Rasheed Qambrani also planted trees as part of the ongoing Go Green Karachi slogan.
readmore »»