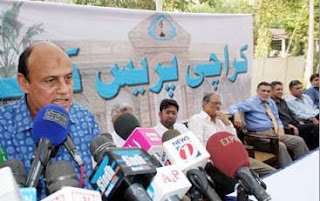 The ‘Meet the Press’ programme at the Karachi Press Club on March 18 was my first as Secretary of the Sports Committee. Not surprisingly there was not enough time at our end to make the necessary arrangements because the outstation hockey Olympians were in town for a brief period and we had very few options.

With the hockey controversy brewing up and all the national newspapers flashing stories under banner headlines day in and day out we had the opportunity of inviting the legendary characters to speak on the burning topic.

Let me give the credit to the KPC Secretary, A H Khanzada, for not having taken even a minute in granting the approval in principle when I discussed with him the idea of holding a programme on hockey. The KPC President, Imtiaz Faran, was also on board right away and so were the rest of the committee members.

Both the top office-bearers of the KPC were there with me to receive the distinguished guests upon their arrival. The members of our Sports Committee were also enthusiastic in welcoming the battalion of Olympians.

We do seldom come across the luminaries of different eras sitting together on the stage. It was a rare occasion when the legends of Pakistan’s national sport had assembled in one terrace. I have intentionally not used the proverbial under one roof because we entertained our worthy guests in the spacious lawn covered by tents.

A normal ‘Meet the Press’ programme is usually held in the centrally air-conditioned Ibrahim Jalees Hall of the KPC. We had to make the tricky decision whether to hold it there or shift it to the terrace where we could accommodate larger number of persons. Because of the sweltering heat having gripped the city of Karachi we had to think twice before finally going for the second option.

We were proved correct because the heat of the subject was going to overshadow the dry weather and it did. Even the old fashioned fans were more than enough to do the business. Nobody cared for the furniture or the settings. The occasion was a momentous one and everybody was absorbed in it, seeing off the blazing sun with a smile.

It was more of a privilege to have also conducted the proceedings of the ceremony that was not only a historic one only for me personally but it was an honour for our beloved institution to have hosted these hockey greats.

These were the moments of lifetime. Sharing the stage with the likes of Akhtar-ul-Islam, Islahuddin Siddiqui, Samiullah Khan, Shahnaz Shaikh, Rasheed-ul-Hasan, Ayaz Mahmood, Shahbaz Ahmed, Qamar Ibrahim and Saeed Khan was something to cherish for the rest of life.

It was one of those rare occasions when the number of chairs fell short on the stage. Quite a few Olympians like Qamar Zia, Moinuddin Khan, Naeem Akhtar, Mohammad Irfan and Kamran Ashraf had to be seated among the audience but they were recognized and acknowledged.

The ceremony, as anticipated, was widely reported by the electronic and print media whose representatives were in attendance in good number to cover the event. It may have been ‘another story’ for many but to me it was something special. readmore »»