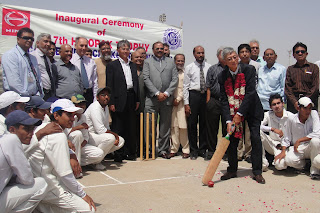 Hinopak Motors, one of the market leaders in the automobile industry, have vowed to continue their patronage to sports in general and cricket in particular.

The assurance was given by their Managing Director & CEO, Hideya Iijima, who inaugurated the 17th edition of the Hinopak Trophy Inter-Firms Cricket Tournament 2010 at the UBL Sports Complex in Karachi.

In his welcome address Mohammad Irfan Shaikh, Founder Chairman, Hinopak Sports & Recreation Club, noted that the Hinpoak Trophy, launched in 1989, has been successfully organized every season and has come to be regarded as one of the most prestigious departmental competitions on the city circuit.

“The prime objective behind sponsoring this tournament for the last couple of decades is to make a humble contribution for the betterment of the society and not for the publicity of our products. We remain at front line to perform our role through continuous support for nurturing the sports activities within our society,” Irfan Shaikh, who is also a Vice President of the KCCA besides being a top leader of the Lions International, observed.

He added that Hinopak Motors will remain in the forefront to perform its role through not only the supply of environment and customer friendly products but also through its continuous support for nurturing the sports activities within the society.

The KCCA President, Dr Shah, acknowledged Hinopak’s consistent and long-term support to cricket and urged the other multinational corporations to come forward and promote activities to encourage the youngsters.

Dr Shah, also President of the Sindh Olympic Association (SOA), lauded the efforts of Irfan Shaikh in particular for being instrumental in sustaining the Hinopak sponsorship for different sports activities.

The long serving KCCA Secretary, Prof Siraj-ul Islam Bukhari also acknowledged Hinopak’s monumental contribution to cricket over a period of about two decades. He thanked Irfan Shaikh for extending the overwhelming support in making Hinopak Trophy as one of the most sought after annual events. 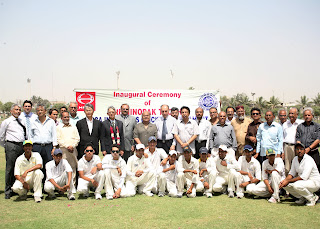 Naushad Riaz, Chairman, Hinopak Sports & Recreation Club, founded by Irfan Shaikh, stated that their company since its inception has always been in the forefront to promote sports activities and encouraging its employees to participate in sports and become a part of the healthier society. He credited Director Sales & Marketing, Irfan Shaikh, for having built a solid platform and spread the sports culture in the society.

Meanwhile as many as 22 outfits have entered the 17th Hinopak Trophy Inter-Firms Cricket Tournament 2010 being held at different grounds of the metropolis. All the matches will be 50-overs-a-side affair and no game would be reduced to less than 40 overs under any circumstances.