The momentum is with India at the moment and they need to play very badly indeed in order to deny themselves the chance of lifting the trophy which has eluded them for decades now.

The Indians have had the knack of giving it away and not delivering at crucial stages but this outfit, led by Mahandra Singh Dhoni, has far too many match-winners to cope with the contingencies.

No other team going into the Cricket World Cup 2011 is as strong on paper. Neither has any of their rivals have had the ideal preparations. The pitches are going to suit them. The conditions will inspire them. In my estimation no side ever has had held this kind of advantage entering the World Cup.

There was no clear favourite in 1975 when the West Indies won the inaugural event in England. Primarily at the strength of their fast bowlers the West Indians were the favourites in 1979 and they did live up to the billing. Their invincibility was tarnished by India a few months ago before the big event in the summer of 1983 and they were dethroned at the hands of the same rivals in the final.

Co-hosts Pakistan and defending champions India were the favourites in 1987 but neither of them made it to the final with Australia being the surprise winners. Quite a few teams were rated highly in 1992 but the title was clinched by Pakistan, languishing near the bottom of the table at the halfway stage of the competition.

Sri Lanka made most of the home advantage in 1996 while experimenting with brave tactics that paid dividends on the docile sub-continental pitches. South Africa looked the strongest on paper in 1999 but they became victims of their own nerves to let Australia win the title.

Australia faced a lot of problems off the field on the eve of the World Cup in 2003 but they displayed mental toughness to defend the crown successfully. They endured frightening moments leading to the event in 2007, having been whitewashed by New Zealand in the ODI series, before conjuring up another title win. 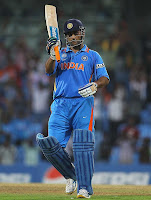 The scenario is different this time round. Except Ricky Ponting, they have lost almost all the architects of the previous three World Cups one after another. Australia find themselves in a tough corner once more. They were boosted by a 6-1 win over England but the losses in both the warm-up games to India and South Africa have brought them down to earth again.

India have enjoyed tremendous success in both Tests as well as ODIs during the last couple of years in particular and the cool heads of skipper Dhoni and coach Garry Kirsten have worked wonders for them. They just need to extend that form for a few more weeks to regain the trophy.

Although each and every game of the tournament will be crucial for them, their real test will commence from the quarter-final stage. Their fate will be dependent on the performance of their boys in the knockout games. They do have the most potent spin attack and the most formidable batting line-up.

Will they sustain the momentum until the end? Will Sachin Tendulkar fulfill his dream in what is expected to be his last World Cup? These are the questions igniting the minds of the cricket followers all over the globe. Well all of us have to wait for another month, until the real battle starts with the quarter-finals.
readmore »»