A day of brothers in international cricket 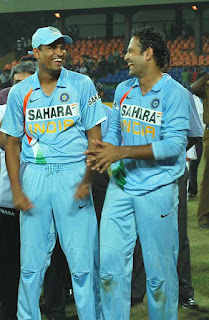 Quite remarkably it was the set of brothers who engineered victories for their respective countries the same day. The Hussey brothers did it for Australia in Brisbane and the Pathan brothers excelled for India in Colombo.

What a night it was at the Premadasa Stadium in Colombo where Sri Lanka and India were engaged in the cracker of a match. The first-ever Twenty20 International on the Sri Lankan soil had nearly all the ingredients of a dream game that kept the audience on the toes until the very end.
The spectators could not have wished for a more dramatic encounter. They got full value for their money as 345 runs were scored off only 39.2 overs and they had the pleasure of watching 11 sixes and 32 fours.
The Indians, the reigning world champions in the shortest version of the game, were the overwhelming favourites to win the one-off tie but they were in all sorts of trouble in the middle overs while chasing a not too formidable target of 172.
The pendulum had swung Sri Lanka’s way when the Pathan brothers, Yousuf and Irfan, were joined at the crease. The ball was turning and the runs were hard to come by. The asking rate had gone into double digit and there were only fast bowlers Zaheer Khan and Ishant Sharma padded up in the hut.

With seven down at 115, the faces of the Indians in the dressing room and those sitting elsewhere in the crowd told the story. It were the Sri Lankan flags that were being waved and it was the turn of their supporters to sing and dance. Little did these cheering fellows know that the complexion of the game would be changed during the course of the next few overs.
It was Yousuf who took the initiative by going after leg-spinner Malinga Bandara who was threatening to look unplayable. The move paid dividends as the Sri Lankan skipper, Tillakaratne Dilshan, was forced to take measures that he probably had not anticipated. In the rush he made the fatal mistake of not pressing into service the known India-killer, Sanath Jayasuriya, who still had one over left. 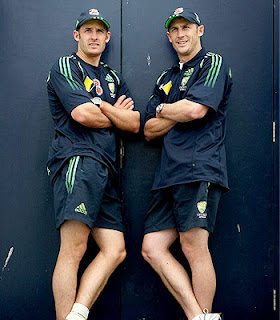 Jayasuriya has had the tendency of delivering against all odds when the Indians are his opponents. Probably his new skipper was unaware of history. His decision to turn to fast bowlers allowed the Pathan brothers to use the pace of the ball in finding boundaries that had dried up during the spells of Bandara and Jayasuriya.
The Pathan brothers played with a cool head, not showing any signs of nerves and their 59-run partnership off 25 balls helped India to complete the win with four balls to spare. But the Indian think-thank should be worried about the manner in which Yuvraj Singh, Suresh Raina, Mahendra Singh Dhoni, Rohit Sharma and Ravindra Jadeja tackled the spinners.
The youthful Sri Lankan side gave a very fine account of themselves and their intensity remained high until the very end. They deserved the credit for having staged a forceful comeback after having put runs on the board.
Earlier in the day it were the Hussey brothers, Michael and David, who stole the limelight helping Australia level the ODI series against New Zealand in Brisbane. The hosts were struggling at 101 for three at the halfway stage of their innings with the asking rate touching nearly run a ball. It needed a career best effort from David Hussey to put them back on track and fittingly it was a hit for the maximum from his brother Michael that settled the issue in the penultimate over.