Brett Lee: The most lethal fast bowler in world cricket 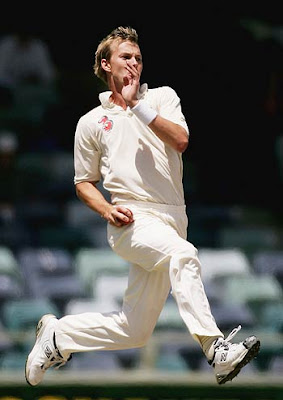 What a fascinating sight it is to watch Brett Lee steaming in and deliver a thunderbolt that has the batsman ducking or swaying. And if the length is fuller and the line straighter the batsman is into a hurried shot to prevent his stumps from going to a walk.
There are very few genuine fast bowlers in the business today. Pakistan’s Shoaib Akhtar may have been the quickest of the lot but he has missed more matches than actually having played in the recent past for different reasons.
New Zealand’s Shane Bond was extremely lethal but he suffered injuries at regular intervals. Steve Harmison of England generated enormous pace but his inconsistency with line and length led to his ouster from the side. Fidel Edwards of the West Indies remained an awkward proposition with his fiery pace but he has also been laid low by fitness problems.
There are two young fast bowlers who appear capable and fit enough to continue for the next few years, Dale Steyn of South Africa and Ishant Sharma of India. We should be hearing a lot about them for the years to come.
The most complete fast bowler on the scene at the moment, however, is the Aussie speedster Brett Lee. It’s great to see him operating at more than 140 kilometers an hour even on most docile of tracks. His intensity is always high and it are the tough characters like him that keep the team motivated in the most demanding of situations.
Lee is a lion-hearted cricketer. He has taken the responsibility of spearheading the Australian attack after the retirement of Glenn McGrath who was a master of line and length.
Lee doesn’t possess the accuracy of McGrath but he has more pace to frighten the batsmen.
Obviously it’s not easy to intimidate the batters of the class of Virender Sehwag, Sachin Tendulkar and Rahul Dravid on any kind of surface but he has shown the skills to test them.
He had looked impressive in patches in the Test series in India, in the absence of real support from the other end, but he is back with his wicket-taking habits on the home turf. 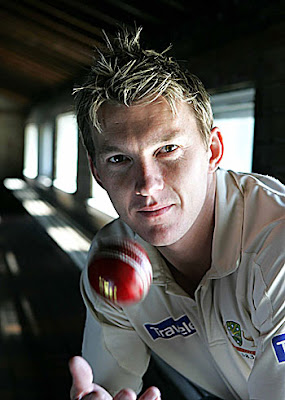 The pitch at the Adelaide Oval, where the second Test against New Zealand was wrapped up inside four days, was as slow as any pitch in India but Lee and company dismissed the visitors cheaply two times.
Lee picked up four wickets in the first innings to limit the New Zealanders to a paltry 270 on a perfect batting strip where’s Australia average first innings score during the past 10 years was in the excess of 500.
It needed the heroics of wicketkeeper Brad Haddin, besides the grit of Michael Clarke, to earn a sizeable lead for Australia and the platform was set for having another crack at the New Zealanders.
Lee was taken for 17 runs in an extended first over during which he overstepped three times when New Zealand came out to negotiate nine overs on the third evening. The openers, Jamie How and Aaron Redmond, survived the fiery burst from Lee and company. 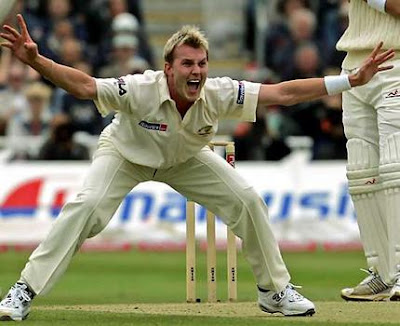 But it was a different story on the fourth morning when Lee ripped their top-order with a sensational spell. Although he was hit for a few runs by Brendon McCallum, fast running out of partners, he did pick up his fifth wickets of the innings.
Lee’s return to top form augurs well for Australia who prepare themselves for a tougher challenge against South Africa. They will need Lee to fire if they are to dominate their formidable opponents.
readmore »»