Sachin Tendulkar seems to be in the form of his lifetime and more importantly he desires to make it count. He has the same hunger for runs as he had 21 seasons ago while breaking into the international arena at the age of 16. 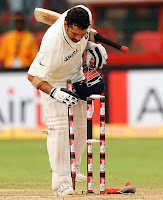 His brilliant knocks earned India a convincing seven-wicket win over Australia in the second Test at Bangalore. If India’s victory in the first Test at Mohali was a narrow one in what had remained anybody‘s game until the very end, they confirmed their superiority over the visitors by whacking them in the following game to be deserved winners of the series.

Tendulkar starred in both the innings. His double-century allowed India to surpass the huge Australian first innings total of 478 while his unbeaten half-century in the second outing ensured a hassle-free triumph for the hosts.

With the hero of the first Test, VVS Laxman, ruled out of the game due to injury and the prolific left-handed opener, Gautam Gambhir, also missing from the line-up, there was greater pressure on the shoulders of the tried and trusted trio of Virender Sehwag, Rahul Dravid and Tendulkar to take up the responsibility of piling up the runs.

Remember India are the only team in the world who register victories at the strength of their batters. It are primarily their top batsmen having been instrumental in taking them to the number one position in the ICC rankings.

Sehwag threatened briefly before disappointing the big crowd and Dravid lived to the reputation of failing on his home turf. The Indians were in a spot of bother and Ricky Ponting exerted pressure in a bid to square the series.

The one man who upset Ponting’s plan was none other than Tendulkar. He outthought the Australian skipper with his brilliant batting and none of the Australian bowlers could contain him. His total control inspired Murali Vijay and together they added more than 300 for the third wicket after the early departure of Sehwag and Dravid.

Another collapse followed after the fall of Tendulkar’s wicket on the fourth morning but not before he had completed a wonderful double-century to take his team ahead. India squandered the opportunity of registering a big lead as all the four bowlers failing miserably with the bat.

The Indian bowlers, however, made amends by dismissing Australia cheaply in the second innings and the home side had all the time in the world on the fifth and final day to chase down the target of 207.

Sehwag disappointed once again and Dravid was demoted in the batting order in order to let the young debutant Cheteshwar Pujara at number three. Vijay played another superb knock but the match was far from over when Tendulkar arrived at the wicket.

It was the third wicket partnership between Pujara and Tendulkar that brought India at the threshold of victory. Dravid had very little pressure when he walked in at number five with Tendulkar in full cry. They completed the job in a clinical fashion.

Tendulkar was very rightly adjudged Man of the Match as well as Man of the Series. He would have also collected Man of the Moment award if it was on offer. He will remember the Bangalore Test for a long time during which he also completed 14,000 runs.
readmore »»