Pascal Guillaum, President, IBSF, visiting the city after 19 years, found it having all the ingredients needed to organize a global competition.

“It’s as fantastic a city as anyone else. I faced no problems whatsoever in the city while commuting to its different parts for past three days,” he observed in an informal chat at Hotel Pearl Continental on the sidelines of the ongoing Jubilee Insurance 7-Nation International Snooker Championship 2012.

“The venue as just perfect and I foresee no real issues in holding the World Snooker Championship in Karachi. I am totally satisfied with all the arrangements made for this 7-nation event,” the IBSF President added.

He lauded the efforts of the Pakistan Billiards & Snooker Association (PBSA) in their efforts of boosting cue sports by organizing international events in this part of the world, making a special mention of its President, Alamgir Anwar Shaikh. 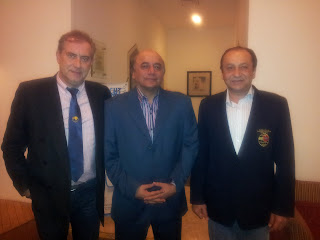 “I am delighted that the PBSA have really been doing an exceptional job. With willing sponsors and supportive media they find themselves in a nice position and they should capitalize on their resources. We will surely back them if they bid for the World Snooker Championship in future,” the soft-spoken Guillaum said.

Hailing from the historic city of Paris, the IBSF President had previously stayed in Karachi during the entire length of about two weeks during the World Snooker Championship in 1993, while being a delegate of the French Billiards & Snooker Association (FBSA).

Guillaum, a lawyer by profession, will not be able to spend as much time in Karachi now because of his professional commitments back home.

“I have fulfilled my promise of coming over for the seven-nation tourney. Unfortunately I won’t be able to stay back until its conclusion because of a hearing of case in Paris on March 9,” he explained.

“I have had very comfortable stay in this vibrant city again. I went to Zamzama in Defence a couple of times besides spending some time on what I consider as splendid beaches of Karachi. Honestly speaking it has been a wonderful trip,” Guillaum stated

“I couldn’t visit the much talked about French beach during this tour to Karachi because it was little far but I will make it a point to go there when I am around next time,” the IBSF President said.

Mohammed El Kammah, Secretary General of the IBSF, not only seconded the views of his President but he appeared even more impressed with the organizational capabilities of the PBSA, reckoning that there won’t be hindrances in having more international snooker competitions in Pakistan.

“I have absolutely no doubt in my mind that Karachi is as safe as any other city. With so much security in place there should be no problems in hosting any kind of mega event here,” the IBSF General Secretary noted.

“A few people in the IBSF may be having some reservations but we will put our weight behind the PBSA if they are interested in hosting international events. I am confident that on the basis of our report of this particular tour, the entire IBSF Board will be supportive of the Pakistan snooker authorities,” he concluded.