Posted by Editor at 5:46 PM .
0 comments
Labels: Pakistan v Australia 2010
By Syed Khalid Mahmood
Yes Australia had to play far too poorly to lose a Test match to Pakistan and they finally managed to do it at Headingley. Considering the huge gap in the strength of the two teams the Aussies had to play much below their potential to deny themselves another series win against their demoralized rivals.
Ricky Ponting deserved full credit for having allowed Pakistan to come from behind and square the two-Test series against the heaviest of odds. 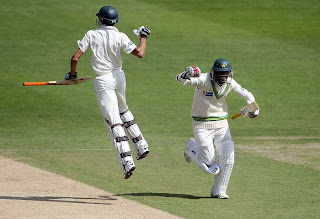 Pakistan had yet another new captain for the Test match in Salman Butt and the composition of their team reflected as much uncertainty as in the past. There were changes in the line-up as usual and there was nothing to suggest that they had the ammunition to undo the Australians.
A lot has already been written and spoken about the blunder Ponting committed by electing to bat after having called it correctly. To cut the long story short I don’t think the Australian captain was in his senses when he made probably the most horrible decision of his captaincy career.
Everybody knew that traditionally the Australian captains preferred to put runs on the board to bring their opponents under pressure rather than insert them into bat. But there have been exceptions and they have also gambled and succeeded.
May be Ponting and the Australian think-tank took Pakistan very non-seriously and they didn’t mind batting first even in the overcast conditions on a lively pitch offering plenty of swing to the bowlers.
The Pakistanis could not believe their luck when Ponting made the outrageous decision because they knew that they were being offered a lifeline.
It became evident within a couple of hours that Ponting had committed a suicide and Australia had to play a catching game afterwards. In the past they had been successful in the damage control exercises but they looked out of sorts in this particular match to finally it by three wickets on the fourth morning.
It’s not certainly enough for the Australians to have just gone down fighting. They had to pull it back from somewhere but they lacked the purpose that had been the hallmark of their team until not too distant past. 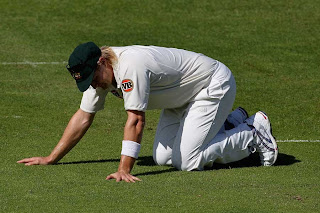 How often would one see Michael Hussey drop a sitter in the gulley region or watch Shane Watson make a mess of a regulation slip catch? Their fast bowlers were all over the place on a pitch they could have exploited much better. It was one of those games which they would like to forget quickly.
Pakistan, on the other hand, have cashed in. They have to thank their stars as the prayers have moved the mountain once more. When the luck is on their side they become invincible with even the weakest of arsenals.
Whether the inexperienced Pakistan side with a new captain deserved to win the game or not is a matter to debate but there should be no doubt in anyone’s mind that Australia played terribly badly to let themselves down and draw the series instead of taking it once more. What next skipper Ponting?
readmore »»