With the postponement of the bilateral series against India, the Jubilee Insurance 38th National Snooker Championship 2013 has been brought forward by a couple of weeks and now it will staged at the Karachi Gymkhana from March 17 to 25. 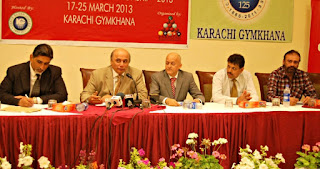 The officials of the Pakistan Billiards & Snooker Federation (PBSF) were in a state of fix over the past few weeks because of the delay in holding the Punjab Cup which was originally scheduled to be completed last December, like the other three provincial tournaments which serve as qualifiers for the National Championship.

The PBSF President, Alamgir Anwar Shaikh, conceded during the media briefing on March 13 that the federation was not empowered to solve the problems within the Punjab Billiards & Snooker Association and they themselves had to resolve the matter.

“Thankfully the Punjab Cup has been organized and we are all set to start the National Championship 2013 on March 17 with the representation of all the four provinces as well as the federal capital,” he remarked. Alamgir Shaikh, when questioned, also confirmed the cueists took an unusually long time before signing the central cueists.

“The cueists held their own point of view and they took a lot of time in finally realizing that the new format in the national ranking tournaments was actually meant to make the circuit more competitive and produce better quality material,” he stated.

“Under the new format which have introduced on an experimental basis this year, only the top eight cueists at the end of the last national ranking tournament will be retained for the National Championship next year. Until now we used to allow automatic entry to 16 top cueists,” the PBSF President explained.

Tahir Ahmed, Managing Director, Jubilee General Insurance, vowed to continue supporting snooker and he foresaw a bright future for the country in the field of cue sports in particular.

He stated that, like the whole nation, he was thrilled at the accomplishment of Mohammad Asif, adding that it was a matter of time for Pakistan to have produced another world champion.

“I have had this gut feeling all along. Our cueists were coming up with creditable performance in the various international events in the recent past and it was just a matter of putting the acts together which Asif did successfully in Bulgaria,” Tahir Ahmed shared.

World champion Asif will return to defend his national crown in the Jubilee Insurance 38th National Snooker Championship 2013 which carries an enhanced prizemoney of Rs 267,000.

The highest break of the competition award offers a stunning purse of Rs 25,000, as compared to Rs 5,000 until last year, after the spontaneous announcement from the Karachi Gymkhana’s President, Homi Khambata, and Convener Sports, Javed Mir, to contribute Rs 15,000 towards this prize.

A total of 40 cueists, divided equally in eight groups, will be contesting the event. After the league matches the top two cueists from each group will be advancing to the pre-quarter-finals.
readmore »»