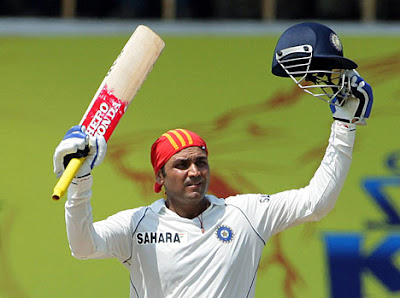 Although India’s skipper Mahendra Singh Dhoni, credited his bowlers for engineering the win over England in the fifth One-day International at Cuttack that allowed the hosts to move into 5-0 lead but in my opinion the exhilarating knock of opener Virender Sehwag settled the issue.
270 wasn’t a modest total by any stretch of imagination on a pitch where the bounce was variable. The dew factor did create problems for the bowlers in gripping the ball but there was plenty in the wicket to keep them interested.
It would have been a different ball game altogether, had India not got off to a flying start through their tried and trusted opening pair. Sehwag in particular was in his typically devastating mood.
Sehwag’s awesome batting display overshadowed even the genius of Sachin Tendulkar who kept the scoreboard ticking over from his end too. Together they built a platform from where India could have lost only due to self-destruction.
The 136-run opening partnership meant that more than half of the target was achieved and since the runs had come at a very brisk pace there were far too many overs available for the incoming batsmen to get their eyes in.
The start becomes so vital while chasing a big target. It could have been a different story to relate if the Indian openers had consumed overs in settling down and then one of them or both of them had perished without making a worthy contribution.
When Sehwag is on song every bowling attack looks ordinary. The trio of Stuart Broad, Andrew Flintoff and Steve Harmison were put to sword once more. They bowled well but they were unable to prevent the belligerent opener from playing in the manner he desired.
It was another Sehwag show basically that powered India to a six-wicket triumph with more than half a dozen overs to spare. His 73-ball 91 was a treat to watch. It was perfect entertainment for the crowd.
Another century for the master blaster was there for the taking. But a cruel umpiring decision denied him the milestone he so richly deserved. He was on top of the bowling from the word go. To have done so against a decent fast bowling attack and that too on a double-paced wicket was quite an accomplishment.
Sehwag is in the middle of a purple patch and his timing of strokes is something out of this world. His hand-eye coordination is second to none and the manner in which he blasts the fastest of bowlers is a treat to watch.
Tendulkar was castled just after completed another masterful half-century. He was undone by Harmison’s change of pace after having executed a series of delightful shots on either side of the wicket.
Tendulkar’s departure brought in Yuvraj Singh to the middle and there was anticipation for more fireworks. But Yuvraj came and went quickly and when Sehwag was also given out the very next ball there was a glimmer of hope for England.
But skipper Dhoni and left-handed Suresh Raina batted very sensibly and their solid half-centuries ensured another comfortable victory for the hosts. Dhoni was at the receiving end of yet another rough decision from the umpire as he was long way out of the crease when adjudged leg before.
readmore »»