Pakistan and India did not let the history to repeat as far as their performance in a global competition in the Caribbean was concerned. With the fiasco of the 2007 World Cup fresh in the minds of their supporters it was not unusual to find the cricket fans on both sides of the border heaving a sigh relief at watching their team win the opening match of the ICC World Twenty20 2010 in St Lucia on May 1.

March 18, 2007 was a date neither of the two sub-continental giants would ever forget. It was on this day when Ireland had knocked Pakistan out of the World Cup and Bangladesh had shocked India to let them prepare for an early exit too.
Three of these four teams were in action on May 1. With Ireland having a well deserved rest to regroup after the thrashing they received at the hands of the hosts the other day, the fourth team in the field was Afghanistan.

Mohammad Ashraful frightened Pakistan with his spectacular knock while chasing a target of 173. His 91-run third wicket partnership with skipper Shakib Al Hasan had opened up the game but it was debutant Mohammad Sami who brought relief for the defending champions by picking up two wickets in an over. 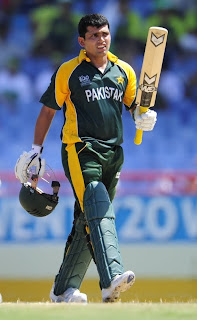 Earlier the Pakistan openers Kamran Akmal and Salman Butt, scoring 73 each, had taken full advantage of the sloppy work in the field by the butter-fingered Bangladeshis who were very disappointing with the ball as well.

India didn’t look entirely convincing but still they were good enough to tame minnows Afghanistan without much fuss. Pakistan, on the other hand, survived a few anxious moments while defending their big score but not surprisingly Bangladesh didn’t demonstrate mental strength to do it.

The Indian skipper, Mahendra Singh Dhoni, who blasted a couple of big sixes to bring about an early end to the game, was very rightly looking for more improvement from his side if they were to regain the trophy they clinched under him in 2007.

“We hope to get better and better as the tournament goes. With today's win we have qualified for the Super Eight stage. That is when we need to play at our best because each of the teams has the potential to win the title,” Dhoni said after completing seven-wicket victory. 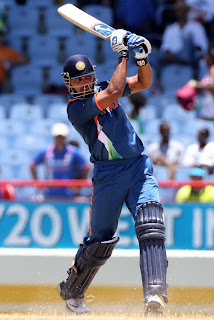 "We jell well as a team and the dressing room atmosphere is wonderful. We play and win as a happy family. If we continue in the same spirit, we should be able to do well in this event. Murali Vijay is an asset to the team. We saw during the IPL what he can do with the bat. He is a batsman who looks quiet but is capable of playing big shots when the situation warrants," he added.

Afghanistan did gain some points by putting up good fight in their first game on the international stage and enjoyed the experience of playing against a high-quality side.

"India is one of the best teams in the world. We were very happy to play our first match against them. Early in the morning the wicket was difficult for us but it was a good experience for our guys,” the Afghanistan captain Nowroz Mangal acknowledged.
readmore »»