The City School and New Standard Secondary School emerged triumphant over their respective rivals in the Group H matches of the Omar Trophy Inter-School Cricket Tournament 2016, being organized by the Pakistan Veterans Cricket Association (PVCA). 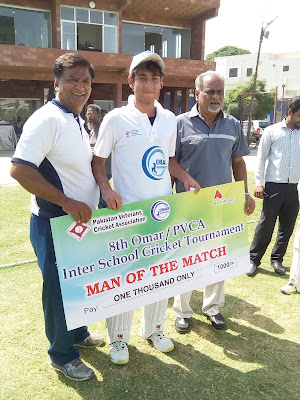 The City School bowled out Falconhouse Grammar School, who batted first after winning the toss, for 157 in 37 overs with medium-pacer Hurair Butt (3-26), adjudged Man of the Match, being the pick of the bowlers.

Coming into bat at number eight, with Falconhouse Grammar School in disarray at 93 for six, Abdullah Ejaz counterattacked with purpose, hitting three fours in his 29 off 26 balls, adding 37 for the eighth wicket with Mohammad Muneeb, who remained undefeated on 17 off 21 balls.

Earlier opener Mohammad Ali made a patient 26 off 57 balls. The target of 158 in 40 overs didn’t test The City School batsmen, as the 111-run unbroken stand for the second wicket between opener Zarar Shah (60 off 38 balls) and Hurair Butt (62 off 39 balls) saw them home with as many as nine wickets and 24.3 overs in hand.

The other match of the day, between New Standard Secondary School and Kamran Public School, turned out to be more absorbing one.

Electing to bat first, after calling correctly, Kamran Public School was all out for 144 on the penultimate ball of its innings. Four of their batsmen, Anas Ilyas (26 off 33 balls), Obaidullah (26 off 44 balls), Saif-ul-Haq (21 off 25 balls) and Hashir Ansari (20 off 25 balls) got off to starts but neither of them could turn it into a big score.

They were derailed by the left-arm spinning duo of Mohammad Tariq (3-24) and Mohammad Taha (2-24) while medium-pacer Mohammad Junaid (2-44) cleaned the tail.

New Standard Secondary School made a heavy weather of its target 145 in 40 overs, losing wickets at regular intervals after opener K M Nafy, named Man of the Match, had put them in the driving seat by scoring 74 off 55 balls with the help of two sixes and 10 fours.

Kamran Public School staged a comeback into the game through off-spinner Usama Adnan (4-24) as New Standard Secondary School, who collapsed from 109 for two to 140 for seven, was made to fight until the end. They got over the line with 19 overs to spare.
readmore »»