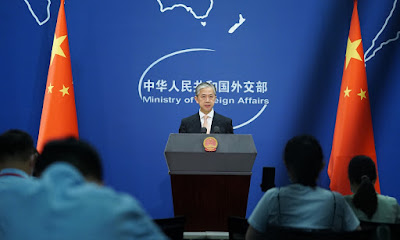 As China was making all out efforts to ensure timely completion of all projects related to the 2022 Winter Olympics to make the international gala event a memorable one for the game lovers, however at the same time, some organizations were out to thwart the international event on false pretexts.
"Some organizations are trying to link the Beijing Winter Olympics with so-called human rights issues to pressure China,” the Chinese Foreign Ministry spokesman, Wang Wenbin, stated during a briefing in Beijing on September 22.
“Such an attempt to politicize the sporting event is wrong. These so-called attempts are in fact against the Olympic Charter and on the other hand it sabotaged the development of the international human rights cause,” he reckoned.
The 2022 Winter Olympics, also known as the XXIV Olympic Winter Games, and commonly known as Beijing 2022, is scheduled to take place from February 4 to 20 February 2022, in Beijing, the capital of China, besides and towns in the neighboring Hebei province.
readmore »»

Veteran cricket scorer and statistician, Bernard Lawrence, who was more famously known as Ben, has died peacefully at the age of 81 in Karachi.
His death, having taken place on August 13, was confirmed by the family sources. He is survived by five children, three sons and two daughters.
Born at Lahore on June 28, 1939, he was acclaimed as one of the pioneers in cricket scoring in Pakistan. He did scoring assignments for Pakistan Television (PTV) as well as Radio Pakistan, becoming a known face in commentary boxes, since 1970.
Having studied at the iconic educational institutions like St Patrick School & College and Institute of Business Administration (IBA), Ben continued doing cricket scoring stints for nearly three decades when pursuing a career in advertising industry.
He did the scoring, mostly for PTV, in numerous Tests and One-day Internationals during a long career which also took him to England for the 1983 World Cup and to Australia and New Zealand for the 1992 World Cup, which was won by Pakistan.
Ben was also engaged in statistical works of cricket for a number of years and he compiled and published a few books on the subject.
He was a recipient of several awards in the field of advertising as he served some of the top organizations like MNJ Communications, Manhattan Pakistan, Argus Advertising, Spectrum Communications and Paragon Advertising.
readmore »»