Posted by Editor at 5:03 PM .
0 comments
Labels: England v Pakistan 2010
By Syed Khalid Mahmood
Pakistan’s cricket team, demoralized and weakened, due to the ongoing spot fixing scandal, came up with more than satisfactory performance in the first Twenty20 Internationals at Cardiff on September 5. 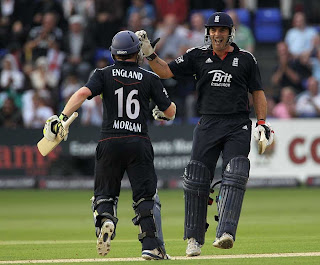 England, the reigning world champions in the shortest version of the game, made a heavy weather of the modest target of 127 and it was the unbroken sixth wicket partnership of 67 in 7.1 overs between Eoin Morgan and Michael Yardy that took them through after some anxious moments.
England had themselves to blame for having let their opponents come close to them. While the bowling was generally steady their catching left a lot to be desired. It was quite unusual for their fielders to have grassed as many as three catches in a T20 game
With the majority of the Pakistan players not well versed with the unpredictable weather conditions of England there was certainly an opportunity for the home team to dictate terms.
Pakistan’s tactics, after being put into bat by Paul Collingwood, were unsurprisingly as strange as ever with everyone bent upon playing his individual game rather than doing it for the team.
Kamran Akmal and Shahzeb Hasan, who opened the innings, went after the bowling from the very first ball as if they were to face dire consequences for treating the good balls with some degree of respect.
I don’t know what the Pakistan openers thought of themselves but it was really something out of the extraordinary to hammer the bowlers from the outset without getting their eyes set in the middle.
The agricultural shots commenced in the opening over bowled by left-arm quickie Ryan Sidebottom, one of the stars in England's World Twenty20 conquest in the Caribbean earlier this year. Kamran was not lucky enough to play around with Tim Bresnan whose extra pace did the trick.
The veteran Mohammad Yousuf, who was not in the scheme of things for T20 cricket for quite sometime, was probably drafted in the team more because of his vast international experience rather than his ability to play the ball late to bisect the fielders. 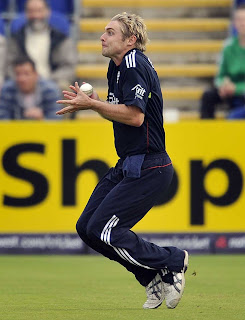 Yousuf chanced his arms once too often and many of his mistimed lofted shots just eluded the fielders. He was unable to get on top of the wily off-spinner, Graeme Swann, who bowled yet another magnificent spell. Shahzeb also was bamboozled by the same bowler. With the pitch offering extravagant turn, left-arm spinner Yardy also proved to be a hard nut to track.
With four wickets having gone down for 88 in 15.1 overs the pair of Umar Akmal and Shahid Afridi refrained from throwing caution to the wind in the final stages and they were happy to collect 38 runs off the last 29 balls of the innings. The hard-hitting Abdul Razzaq was not even required to bat.
England were not expected to be tested while chasing a target of 127 but the game had become wide open when lost fifth wicket at 77. The pace of Shoaib Akhtar and the spin of Shahid Afridi caught the hosts napping and it was left for Morgan and Yardy to repair the damage and they did the job to perfection.
readmore »»