The pioneer of cricket coaching in Pakistan is no more


The pioneer of cricket coaching in Pakistan, Ahmed Mustafa, breathed his last on August 10. He was 69. Although he had been laid low by various diseases over the years which severely affected his mobility for the last few years it was a freak accident a day earlier which became the cause of his death. 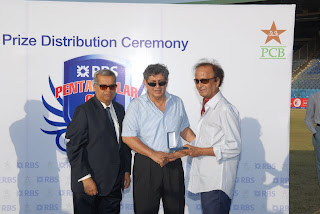 According to the family members, Ahmed Mustafa, who had founded Cricket Coaching Centre, the first-ever cricket academy in Pakistan in 1987, was unusually hale and hearty on the morning on August 9 when he also telephoned a few close friends to extend Eid greetings.

It was during this process, around 12 noon, when he fell suddenly while approaching the telephone set in the TV lounge. It could not be found whether he suffered a stroke or he lost his balance due to some other reason. His head hit the edges of a wooden chair and he collapsed instantly. He was rushed to the hospital in unconscious condition where the doctors carried out various tests including CT scan.

The family members were informed about the serious nature of the head injury as he was placed in the intensive care unit of the Plastic Surgery Hospital on Shaheed-e-Millat where all his previous medical records were available. His condition deteriorated and he was put on ventilator at midnight. He didn’t respond to the numerous attempts made to revive his breath. At about 5 am he was pronounced dead.

Upon hearing the sad news, quite a few friends, the majority of them being cricketers, rushed at the family residence of Ahmed Mustafa in PECHS at a short notice. They included Asif Ahmed, Mahmood-ul-Hasan, Nasim-ul-Ghani, Iqbal Umar, Brig Salahuddin, Mirza Masroor Ahmed, Khalid Rafiq, Jalaluddin, Salahuddin Ahmed, Faisal Iqbal, Mohammad Javed, Wajihuddin and Ali Hussain. He was laid to rest in the DHA Phase I graveyard after Asr prayers.

Nasim-ul-Ghani, a former Test all-rounder, who has also headed the national selection committee besides holding other administrative posts in the Pakistan Cricket Board (PCB) over the years, was among the last persons to have talked to Ahmed Mustafa with whom he had an association for more than five decades.

“It’s shocking. I can’t believe it. He was talking in such a relaxed manner. We talked for quite sometime as we usually used to do. I never knew that it would be our final conversation,” the visibly upset Nasim-ul-Ghani remarked.

Asif Ahmed, another former cricketer and probably the closest friend of Ahmed Mustafa, alongwith Mahmood-ul-Hasan, was also shell-shocked at what he described as sudden death caused by a freak accident.

“Just one day before his death I had driven him to an automobile workshop at Tariq Road. He was very keen to have his car fixed before Eid. He was mighty pleased when the mechanic did the job to his satisfaction. Little did we know that he actually desired his family car to return to order in his lifetime which indeed was done,” Asif Ahmed narrated in choked voice.
readmore »»