Imran Shahzad, who used to be the premier cueist of the country until the start of the year, will be defending his title in the fourth edition of the NBP Ranking Snooker Championship 2012 starting at the Defence Authority Creek Club in Karachi on May 21. 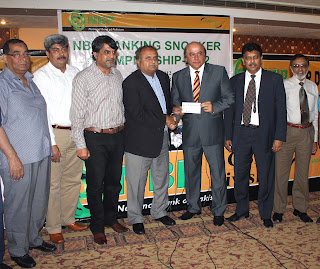 Meanwhile the controversial Shehram Changezi has been given wild card entry in the event whose details were unveiled by Alamgir Anwar Shaikh, President, Pakistan Billiards & Snooker Association (PBSA), in a media briefing on May 17.

The championship is being sponsored by National Bank of Pakistan (NBP) for the fourth year running. Iqbal Qasim, Head of the NBP Sports & CSR Division, who is also chairman of Pakistan Cricket Board’s selection committee, presented a cheque of Rs 850,000 to the PBSA officials as sponsorship fee.

In his brief remarks on the occasion, Iqbal Qasim, known to be a man of few words, vowed to continue extending support to cue sports in future as well but he expected the cueists to perform better at the international level to be considered for employment at the bank.

The Islamabad-based Shehram, who spearheaded the movement against the PBSA four years ago, has been granted a wild card for the second ranking tournament of the year whereas in the past the Association had only done so for the National Championship at the start of the year.

Although the PBSA President was tight-lipped about the behaviour of the cueists in the recent past, he did disclose that there was a revolt-like situation on the eve of the National Championship a few months ago and the Association was prompted to delay the implementation of the desired changes in the format of the national events.

The PBSA went another step forward in accommodating the cueists by allowing entry to Yasir Nadeem, also from Islamabad, which has raised the number of participants to 41 instead of the planned 40.

Alamgir Shaikh pointed out that the cost of staging the championship has enhanced manifolds by raising the allowances of the outstation cueists, who will be paid Rs1,500 per day for not only for the entire length of the event but also for a day before and after it.

“The total prize money on offer is Rs 174,000 but the amount to be paid to the cueists in the head of allowances would be more than four lacs. We considering increasing the winning purse but we couldn’t more in the available resources,” the PBSA chief reasoned.

He expressed his immense displeasure at the disappointing performance of Mohammad Asif and Sultan Mohammad in the recently held Asian Snooker Championship in Doha, Qatar, and hinted at the possibilities of them being issued show-cause notice for not delivering the goods in the continental event.

He, however, defended the decision of the PBSA to send two officials with two cueists, arguing that he had gone to Doha to present Pakistan’s case for bidding for the Asian Championship while Munawwar Shaikh traveled as manager, adding that the Association didn’t have to bear the costs of the fifth member of the squad, referee Shabbir Hussain Daruwala.

Alamgir Shaikh didn’t rule out the possibility of appointing Mohammad Yousuf, a former world champion, as Pakistan’s coach provided the outspoken cueist was willing to abide by the PBSA Code of conduct besides quitting domestic circuit.

“We haven’t signed any deal with India’s Sanjay Sawant or Yasin Merchant because we have yet not been released the funds by the Pakistan Sports Board (PSB) for this purpose. We would be more than glad to consider Yousuf, whose contribution to the Pakistan snooker is enormous, if he is prepared to do it voluntarily,” the PBSA President concluded.
readmore »»