India, seeking their 100th Test win, were ditched by the nature once more. The state of the match at the Basin Reserve, Wellington, was such that no force on earth could have denied the Indians a massive victory. 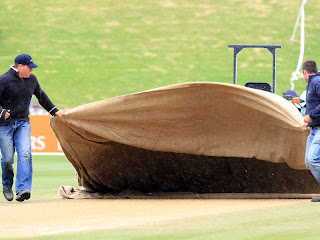 But as it had happened on numerous occasions in the past the outside factors came into play to deprive India another thoroughly deserved win. They had been so unlucky in pressing home the advantage so many times and history repeated itself once more.

New Zealand were in dire straits throughout the third and final Test and they needed a miracle to save the game. The nature came to their rescue just when they were about to sink in the afternoon session on the fifth and final day.

The Indians had done reasonably well in the morning to pick up three wickets and they were closer to victory when they got another one soon after the luncheon break. The match could have finished in the same over, had Simon Taufel, the greatest umpire of the world, ruled Daniel Vettori not out when a ball from Harbhajan Singh, having pitched in line, was going to crash into the middle-stump.

Had Taufel made the correct decision, Vettori’s departure would have brought to the middle last man Chris Martin, who didn’t possess the capacity to come to terms with the pressure or the deadly spin bowling.

Martin would have walked to the crease in any case, if Ishant Sharma, standing at square-leg, not dropped a sitter in the very next over. Iain O’Brien had turned a full toss from Sachin Tendulkar straight into the hands of Sharma who was probably not anticipating a catch.

Vettori and O’Brien played or rather somehow survived the next few overs and skipper Mahendra Singh Dhoni had to summon Zaheer Khan for finishing off the tail with the second new ball.

The left-arm fast bowler delivered a couple of looseners with the old ball before collecting the shining cherry from umpire Darryl Harper. Before Zaheer could bowl the second delivery with the new ball the drop of rains caught the attention of the umpires and they ordered the groundstaff to rush with the covers.

With the strong wind blowing, it was generally being believed that it was just a passing shower and the game will resume shortly. There was no forecast for rain until the evening and it was appearing a matter of time for the players to return.

Anyone who is a student of sports history or well versed with the fate of the matches involving India, would have known that the match was unlikely to get underway. The umpires inspected the pitch a few times because the rains did stop for once in a while. But the game could not resume. It had something to do with destiny as India are one team who have been the unluckiest one in finishing off things. 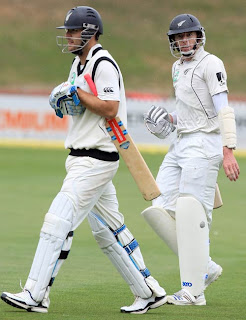 At times it makes one wonder how have India managed to win 99 Test matches because they had to overcome so many other factors besides downing their opponents. They have to create much more opportunities for registering a win than any other team.

With the rains robbing India of a certain victory in the third Test, they had to settle with a 1-0 win the series which was not a true reflection of their dominance. They have taken 41 years to win a Test series in New Zealand. One can understand why after the events in Wellington.