Tai’s Karate Centre, the most famous of all martial arts institutions of the country, hosted an Iftar-dinner reception in the honour of its students at its international headquarters, housed at the KGA Gymkhana in Karachi, on June 16. 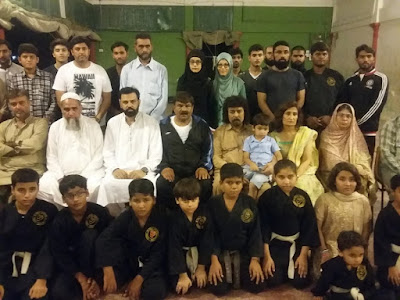 Around two hundred persons, mostly the trainees of the centre alongwith their instructors and support staff, besides representatives of media, attended the ceremony which was organized by Mukhtar Ahmed, one of senior black belters, and a livewire member of the centre.

The iconic figure of Grand Master Mohammad Ashraf Tai, a legend in his own lifetime, also graced the occasion with his family.

In his brief address on the occasion, he commended Mukhtar Ahmed for helping in the revival of organizing social events at the Tai’s Karate Centre which goes a long way in further boosting martial arts in the country. 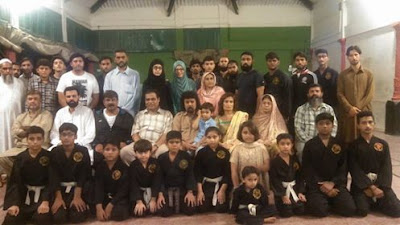 Mukhtar Ahmed, the host of the evening, lavished Grand Master Ashraf Tai with enormous praise for having introduced Bando, the Burmese style of martial arts, in Pakistan many decades ago.

“Sir, your awesome performances against the top martial artists of the world and your passion for spreading the game are legendary. You have earned fame and recognition which was unprecedented in karate,” he complimented the Grand Master.

Grand Master Ashraf Tai indeed has been synonymous with karate for more than four and a half decades now. He has not only excelled himself but more significantly he has spread the flame with his continued coaching to the trainees at the Tai’s Karate Centre.

He has been particularly eulogized for his untiring efforts in training thousands of young boys and girls over the years many of whom are now themselves engaged in teaching the game to new students.

Quite remarkably the Grand Master remains as passionate about the sport of karate as he was at the time of setting up his centre in 1971. He has lost none of his intensity and even these days he teaches his trainees with the same level of dedication and commitment as decades ago.
readmore »»