The famous West Indian umpire, Steve Bucknor, who also became controversial at times, has called it a day. Having stood in the highest number of Test matches, he will not be seen in action at the international level any more. 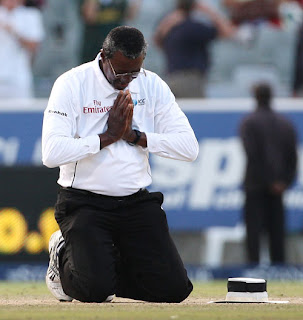 Bucknor was generally recognized as a most respected umpire all over the world. The Indians, however, felt hard done by his decisions and the Board of Control for Cricket in India (BCCI) had reacted sharply after that fateful Sydney Test against Australia in which he was one of the umpires.
Some quarters believe that the displeasure of the BCCI functionaries, having a clout in the International Cricket Council (ICC), had a role to play in Bucknor’s premature retirement for he was supposed to be around until the next World Cup in 2011.
The BCCI, it could be argued, also showed a lot of patience with him because the Indian cricket team had been at the receiving hand in the past as well. It could be by chance only but the majority of the close decisions that Bucknor made in his long career went against India.
Yet the Indians didn’t complain until the second Test of the 2007-08 series in Australia where a record number of decisions went against them. It was amazing to watch nearly every decision go Australia’s way although both the umpires were from a third country. Besides Bucknor, it was England’s Mark Benson who appeared to have brought the game to disrepute by engaging themselves in something that was not cricket to say the least.
The Indian cricket authorities may never be able to forget the bitterness of the Sydney Test where their team had fought back admirably after having crashed in the previous game. The series would have stayed alive, had the umpires not committed far too blunders to ensure a defeat for India.
As it turned out, the change of umpires in the following two Tests enabled India to dominate and bring Australia under enormous pressure. India won the third Test and Perth and it was mainly due to the injury to R P Singh that prevented them from squaring the series in the fourth Test at Adelaide.
Bucknor had announced his retirement earlier this season. He was given a standing ovation when his Test career came to an end with the third and final Test between Australia and South Africa at Cape Town that concluded on March 22. Exactly a week later there were more emotional scenes at Bridgetown on March 29 when he umpired in his last One-day International, between the West Indies and England. 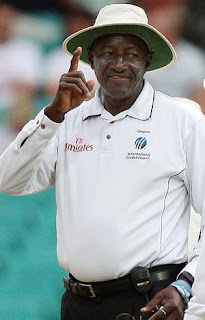 He umpired in 128 Test matches, more than anyone else. He broke Dickie Bird's record of 66 in 2002, before in March 2005 becoming the first umpire to stand in 100 Tests. Only David Shepherd and Rudi Koertzen have umpired more than his 181 ODIs, while Bucknor also stood in five successive World Cup finals, from 1992 to 2007.
Pakistan would be having fond memories of Bucknor because he was the umpire who gave Javed Miandad not out in the final of the World Cup in 1992 when the master batsman had not even opened his account. Pakistan, under Imran Khan, had gone on to win the trophy.
readmore »»