England, leading 2-0, had to play extremely poorly to self-destruct themselves in third Test at The Oval to keep the series alive. They performed below par to lose the game by a margin of four wickets in the end. 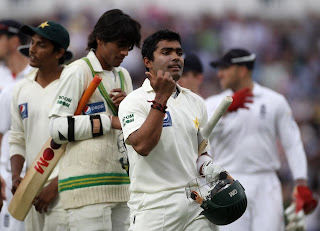 The margin was not the issue. England were not expected to allow Pakistan, in all sorts of problems, to come close. In fact it was being anticipated that the series would be closed without any fuss before the fourth and final Test.

Isn’t it remarkable that the team forced to make wholesale changes emerged victorious against an unchanged confident outfit that had fared consistently as a well-knit unit for past few months.

There was so much chaos surrounding the selection and composition of the Pakistan team that was being branded as the Ijaz Butt XI at home following the ouster of the deserving players having performed exceptionally well in the national tournaments.

There were protests, demonstrations and press conferences in Karachi over the omission of the talented cricketers of the city on the eve of the third Test and the chairman of the national selection committee, Mohsin Hasan Khan, also hailing from Karachi, had literally gone underground.

Yet this Ijaz Butt XI managed to win the third Test against all odds. Call it the Blessings of Ramazan or the Will of God the impossible was made possible once more.

It’s astonishing how the England batsmen collapsed against debutant Wahab Riaz, who had captured just a handful of wickets in first-class cricket at home earlier in the season and his selection was being debated.

England were generous in presenting a debut gift to Wahab Riaz in the shape of a five-wicket haul in his first-ever innings in Test cricket. It’s a kind of feat that many of the greatest bowlers of all time failed to achieve.

Unlike Australia who had collapsed to a meager total on the first day of the Headingley Test, after Ricky Ponting had opted to bat first after winning the toss in overcast conditions, England did recover following not too sensible move of Andrew Strauss to do the same at The Oval. 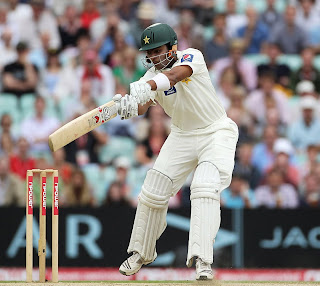 Strauss could have been better off inserting the vulnerable Pakistan batsmen on the first morning when the pitch offered greater life to the fast bowlers. I don’t know why the England captain chose to bat when he had a decent pace attack in the shape of James Anderson, Chris Broad and Steven Finn to attack the opposition visibly short of confidence.

Strauss was guilty of putting his own batsmen under pressure and not surprisingly they couldn’t come good. It was the eighth wicket partnership between Matt Prior and Broad that saved them from humiliation.

Strauss, not looking the leader in command, committed another fatal blunder by dropping a sitter at first slip off lastman Mohammad Asif when Pakistan were just a few runs ahead. That was the easiest of chances that the England captain missed. In the context of the match it was the costliest miss.
readmore »»