This is probably the most astonishing of all results in the recent times. The top ranked Test team, England, has been whitewashed by an outfit, Pakistan, under the command of an ‘interim’ coach (Mohsin Khan) and a ‘compromise’ captain (Misbah-ul-Haq).

For second time in the series England let the game slip away from them after being in total control of the situation. They had lost the second Test at Abu Dhabi after being set a modest target of 145 for victory as they were bowled out for 72 in the most stunning fashion.

The story was not much different in the third and final Test at Dubai where Pakistan had been reduced to 44 for seven in the first session of the game. England could have easily settled the issue by forcing a decisive first innings lead after routing their opponents for 99. England dug their own grave by not managing more than 141 in their first outing.

I don’t know what Andy Flower, under whose coaching England became world-beaters, would be thinking at the outcome of the series. The former Zimbabwean batting great must be wondering how they lost two Tests in a row after being in the driving seat. England could have won the series 2-1 instead of losing it 0-3 on any other occasion.

I think England have worse cricket than this and have achieved much better results. I reckon science will fail if we look at the finer points. England were blown away just at the time they were close to closing the deal.

The England cricket stands dead and buried in the desert of the United Arab Emirates (UAE). It has hit the lowest ebb with the current lot who had passion and skills to rule the world. They had done exceptionally well against all teams in the recent past, only to be laid low by a Pakistan outfit which itself had clouds of uncertainty.

In normal circumstances the analysis tells you a lot of stories. But in certain cases like this one you are clueless because you don’t know how you finished as the second best team even after having dominated the duel.

England’s middle-order, with the likes of Kevin Pietersen and Ian Bell, must be double-minded whether they were out of form or out of luck throughout the series. Openers Andrew Strauss and Aliastar Cook also performed below par. How often would you see all the top six batsmen flop so miserably in every outing?

Somebody said the Pakistan spin duo of Saeed Ajmal and Abdul Rahman was too good for them. But that’s half the story. The English batsmen also struggled and gifted wickets to Umar Gul, a fast bowler, and Mohammad Hafeez, a part-time spinner, at regular intervals. I am sure even wicketkeeper Adnan Akmal would have chipped in with a few wickets, had skipper Misbah asked him to bowl.

You can’t recall so many soft dismissals during the course of a single series. The half-trackers, meant to be hit at will, produced wickets. The England batsmen, who should not have been short of confidence with loads of runs under their belt in the past few seasons, self-destructed themselves one after another.
readmore »»

These have been the most turbulent days in Indian cricket. Not only their team is getting hammered in Australia in every format of the game but one of the most vibrant characters, Yuvraj Singh, is laid low with cancer and currently undergoing chemotherapy in the United States of America (USA).

Yuvraj, who was adjudged Man of the Tournament in the last year’s World Cup, having helped his team recapture the crown after 28 years will now be watching his teammates so dearly miss him in the ongoing ODI series against Australia and Sri Lanka.

His mere presence could have lifted the spirits of the demoralized outfit in the One-day Internationals after the unexpected whitewash in the Test series against Australia.

Although the Indians used to talk about their bench strength with awe, particularly in the batting department, it appears a thing of the past and they badly need committed and courageous batters who could do the business.

In this context the return of Yuvraj becomes all the more important. India would have to live without him for the next few months but he should be walking straight back in the side the moment he passes the fitness test.

It’s indeed unfortunate that he has been diagnosed with cancer with his condition being described "mediastinal seminoma," a germ-cell tumour located between his two lungs. The condition, according to the doctor, is neither lung cancer nor a tumour that had spread into the lungs. Mediastinal seminoma is a rare tumour which forms less than 1% of cancers on the whole.

"We are very lucky to know that this is a seminoma variety of germ-cell tumour which are mostly curable with therapy and moreover would be unlikely to cause any detriment to Yuvraj's career in the long term," the doctor was quoted as saying.

Yuvraj, reportedly, will begin the third of his nine weeks of chemotherapy in the USA. "In the first few days Yuvi may not feel very good. He may feel nauseous, but starting this week he will be on the mend and may even do a bit of training as he improves, under the guidance of a specialist physiotherapist from the BCCI,” the doctor was quoted as saying. 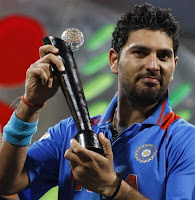 “The chemotherapy has been planned with the aim of ensuring Yuvraj can return to full fitness and readiness for cricket. Yuvraj should be able to start active training in about ten weeks. If I was asked: will Yuvraj Singh the person be cured, I will say very likely yes. If you ask: will we see the return of Yuvraj Singh the cricketer, I would say most likely yes and he will return with the same fervour that he had when he left. In all likelihood, he should be on the field on May 1," he added.

The examples of Simon O'Donnell and Dave Callaghan having resumed their international cricket career after successful treatment of cancer should gladden the followers of Yuvraj and the man himself.

The Australian all-rounder, O'Donnell, had a lump on his rib was found to be cancerous soon after he helped his win the 1987 World Cup. He underwent chemotherapy and made a strong comeback to international cricket in 1988-89.

Callaghan, a South Africa all-rounder, was treated for cancer in 1991. He returned to full health and earned a place in the national squad the following year, going on to play 29 ODIs before retirement in 2003.