Fahad Academy and Fahim School Systems registered victories over their respective rivals in the latest matches of the Omar Trophy Inter-Schools Cricket Tournament 2016, being organized by the Pakistan Veterans Cricket Association (PVCA). 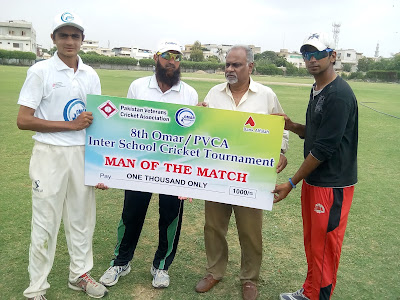 Fahad Academy defeated Happy Palace School by four wickets in a low scoring Group B encounter at the TMC Ground while Fahim School Systems whipped CAA Model School by 58 runs in the Group A fixture at the Hussain Lawai Naya Nazimabad Stadium.

Put into bat, Happy Palace School was routed for 66 in 19.3 overs with Sameer Khan (16 off 25 balls) being the only batsman to reach double figures.

Fahad Academy’s pace duo of Mohammad Shaheryar (2-8) and Naeem Gul (2-22) caused the damage with the new ball and the demolition act was completed by left-arm spinners Akbar Ali (3-17) and Mohammad Umair (2-14).

Chasing a modest target of 67 in 40 overs, Fahad Academy got off to a flying start with openers Hammad Hasan and Mahmood Shah knocking off 31 runs very quickly. But they lost six wickets while scoring the next 29 runs to open up the game. The collapse began with the fall of Hammad Hasan, who emerged topscorer of the match with 23 off 24 balls, hitting three boundaries.

Mohammad Salman’s breezy unbeaten 15 off 13 balls with the help of one six and a four saw them home in a tense finish, although Fahad Academy completed the victory with 27.3 overs in hand. Leg-spinner Zain Khan (2-7) and left-arm medium-pacer Hamza Qureshi (2-27) were the pick of the bowlers for Happy Palace School. The Man of the Match award, however, was clinched by Fahad Academy’s left-arm spinner Akbar Ali for his three-wicket haul. 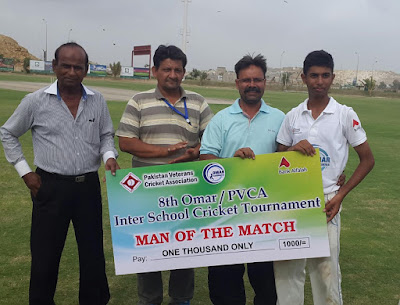 In the day’s other match, powered by the 141-run opening partnership between Hasan Masood and Asad Ahsan, Fahim School Systems posted a formidable total of 227 in 40 overs against CAA Model School.

Both the openers scored 60 each. Hasan Masood was more aggressive of the two, smashing eight boundaries in his 76-ball knock while Asad Ahsan anchored the innings as he struck only three fours while negotiating 107 balls.

CAA Model School staged a comeback after breaking the marathon opening stand. They did a fabulous job by bowling their opponents out for 227, getting all 10 wickets for 86 runs. Medium-pacer Mohammad Fahad (2-38) was their most successful bowler.

Fahim School Systems defended their score successfully as CAA Model School was never really in the hunt after losing wickets upfront. They were all out for 169 in 38.4 overs after having lost the first four wickets before raising 50 of their innings.

Hanzala Niaz (24 off 39 balls) was their top scorer as the innings was wrecked by off-spinner Abdul Rafay (4-36). Hasan Masood, who also picked up a couple of wickets with his off-spin besides scoring a half-century, was adjudged Man of the Match.
readmore »»