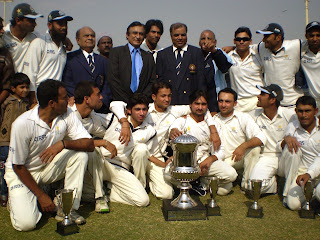 It’s a food of thought for the management of the Habib Bank Limited (HBL) to decide if they could continue compromising with the indiscipline of their cricketers bring the game as well as the department to disrepute.

The manner in which HBL crashed in the final of the Quaid-e-Azam Trophy Cricket Championship 2009-10 at the National Stadium, Karachi, brought to light the lack of commitment and motivation.

Karachi Blues emerged triumphant by a staggering margin of 141 runs in what was a low scoring affair and the game was over on the third afternoon with all 40 wickets having fallen in seven and a half session.

Theoritically the match didn’t last even half of the time it was allotted.
Set to score 208, HBL crashed to 66 all out in less than two hours of batting. Remember it was not a Twenty20 game but a five-day final of the premier event of the country known as the National Championship.

Seeing was believing as far as the HBL collpase on the third day was concerned. There was nothing wrong in the pitch whose bounce was hardly anywhere to be classified as uneven or double-paced as a few of the experts speculated after the early finish to the game.

Mohammad Sami (6-38) and Tanvir Ahmed (4-27) bowled their heart out while defending a low total. Both of them generated considerable pace besides extracting movement off the pitch. The ball had obviously not lost its shine because the HBL innings was over in a matter of 21 overs with the duo of Sami and Tanvir completing the rout.

Sami’s performance merited greater recognition because he was also captaining the side. His attacking instincts yielded results as the HBL batsmen succumbed once the 32-run opening partnership was broken.

From 32 for no wicket, with Taufiq Umar and Saleem Elahi having negotiated the early burst, they had slumped to 46 for five at lunch. Not surprisimgly it was all over during the first hour of the afternoon session with the last five wickets tumbling like pack of cards. 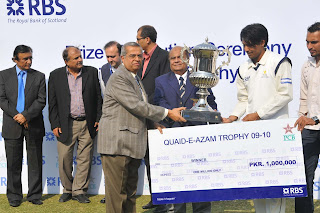 HBL had considerable depth and experience in their batting and it had looked a question of just one big partnership to do it for them. But the lack of application on part of the seasoned campaigners let them down and the task was beyond the late-order batsmen.

Much was expected from Younis Khan but he flopped in both outings. As something said if the national selectors had come there to assess his batting form, then he didn’t deserve to be flown to Australia.

The HBL skipper, Hasan Raza, was guilty of playing an outrageous shot. With two fielders on the boundary line behind square he still chose to take the aerial route and was easily plucked at the stroke of lunch. His decision of holding himself back to number six was also talked about as a move to slaughter an inexperienced chap for his own protection. The move didn't work either. readmore »»