Ricky Ponting, whose Test career was given a new lease of life by the Indians earlier this season, couldn’t find as much luck in the ongoing tri-nation ODI series, and he has been dropped for the remainder of the matches.

The Australian right-hander, famous for taking the attack to the opposition for so many years, appeared to have lost his magical touch and found it difficult to sustain the kind of consistency that made him one of the leading batsmen of the world.

His ouster had seemed a matter of time but he somehow discovered a way to score heavily against India at times when he couldn’t even dominate the minnows. It’s quite extraordinary, yet not surprising, that he got runs against India.

It had happened during the 2011 World Cup when he scored a century against India in the quarter-finals without ever looking on top of the bowling. He lost the captaincy but retained a place in the side for the post World Cup era.

He was not in the best of form either in the recent Test series against the same opponents but somehow he got far too many runs than anticipated. Probably he would not have got away with so many close shaves and still be there as he finds more often than not while playing against India.

There were indications that he might do it again because the tri-series also featured India. He was surely at sea and he needed far too many chances than he actually got during his brief knocks.

After being dismissed five times in a row in single digits he has finally been dropped which does serve as an indication that the days of the former Australian batsman in international cricket are limited and his retirement is just round the corner. The scores of 2, 1, 6, 2 and 7 didn’t help his cause although he served as stand-in captain for the injured Michael Clarke in the last two of those matches.

John Inverarity and his fellow selectors, including skipper Clarke, are adamant that Ponting should go on as a Test batsman. 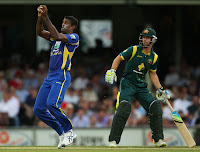 "He made a double-century in his last Test match and we are hoping he remains available for Test cricket, but there can be no guarantees. Ricky is going to consider his future over the next couple of days and talk it over with his family and with his manager. He's wondering whether he retires completely from ODI cricket and then of course there are the implications for Test cricket.” Inverarity was quoted as saying.

"For a man who plays cricket like Ricky has over the last 15 or more years, he has been an integral part of the team in ODIs and Test matches. If he drops out of the ODIs then there is a possible lack of momentum there. There are three Tests in the West Indies, then as I understand it no more Test matches until October-November," he added.

"I spoke with Ricky this morning, I think how he took the news is a measure of the man. He was disappointed and understandably so, but he took it on the chin. He is a gem of a human being, a wonderful bloke, and he takes everything in his stride. He was under enormous pressure two or three months ago, and he never wavered from his dedication. He's a very resilient and wonderful human being,” Inverarity disclosed.
readmore »»