Discarded Pakistan all-rounder Abdul Razzaq turned out to be Hampshire’s hero in the thrilling win over Somerset in the final of the Friends Provident T20 Championship at Rose Bowl on August 14. 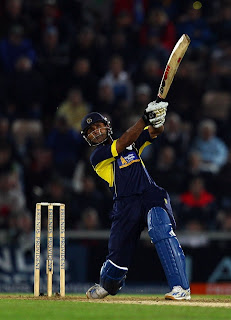 Former South African batsman Neil McKenzie was the calming influence in the big chase, compiling a solid half century, but Razzaq’s all-round excellence was probably more significant in the outcome of the match in which the scores were tied and Hampshire were declared the winners for having lost fewer wickets.
Cricket is very much a team game and the contribution of every player counts to the success but the adjudicators have to take into account the most influential performance while declaring a Man of the Match. To cut the long story short, Razzaq deserved the award which was handed over to McKenzie.
What a thrilling climax it turned out to be and the result of the 151 matches depended entirely to the last ball. Hampshire needed a couple of runs with Dan Christian, batting with a runner, to win the game and just a single was needed for a tie that would have secured the title for them.
Christian had pulled his hamstring on the previous ball while coming back for a second run and Jimmy Adams arrived as his runner for the last ball for which Marcus Trescothick brought all but one of his fielders close to pitch to prevent the single.
Christian missed the last ball and there was a huge appeal for lbw which was turned down. It looked very close to the naked but the replays confirmed that it was just sliding down leg side and it was yet another great umpiring decision.
The leg bye was stolen in dramatic circumstances with Christian also running the length of pitch with his runner. I think there was an opportunity for Somerset to run him out but their fielders also choked under pressure.
There was a little pause before the Hampshire cricketers ran into the field to celebrate their win. The 39-year-old former England all-rounder, Dominic Cork, at last, had a big trophy in his kitty. 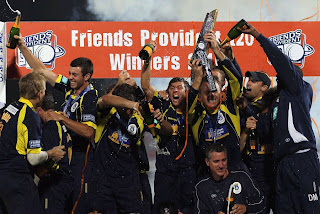 Cork himself played a pivotal role in limiting the Somerset total as his final over was a class act and it reflected what difference experience can make. Something around 15 or 20 runs were expected to be taken when he came on to bowl the last over of the innings with the West Indian all-rounder Kieron Pollard in full cry.
Pollard, who had blasted the other bowlers in his little cameo, was undone by a bouncer from Cork and landed in hospital a few moments later. Cork then produced a few more unplayable deliveries to restrict Somerset to 173 in 20 overs.

Pollard’s injury not only denied Somerset of a few crucial runs but they were also robbed of his quota of overs that meant additional burden on Trescothick who had to fill the vacuum with part-timers.

India’s left-arm spinner Murali Kartik was the trump card for the Somerset skipper but the dampness in the ground kept the ball wet and it became next to impossible to turn the ball. Kartik still bowled very accurately, not giving away any boundary in his first three overs.
readmore »»