Khan Secondary School, The Educators School off to winning start in Omar Trophy 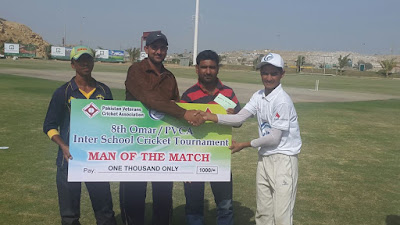 The low-scoring encounter between Khan Secondary School and Al Fatima Academy turned out to be a cliff-hanger at the Hussain Lawai Naya Nazimabad Stadium in which 19 wickets fell for 253 runs in 62.4 overs.

Put into bat, Al Fatima Academy recovered to reach 126 in 29.3 overs after being 74 for six. Kafeel Khan struck one six and six fours in his 39 off as many balls while Mohammad Ali chipped in with 24 off 33 balls.

The target of 127 in 40 overs didn’t look a stiff one and the breezy knock from Man of the Match Aman Khan (42 off 33 balls) put Khan Secondary School in the driving seat.

But Al Fatima Academy fought back gallantly through the off-spinning duo of Hasnain Razzaq (4-29) and Fahad Ali (2-21) to keep the contest alive until the last pair completed the job. In the other match of the day,

Oasis English School was bowled out for 160 by The Educators School at the Eastern Star Ground. Batting first, after winning the toss,

Oasis English School was given a flying start by openers Mohammad Sabir (39 off 49 balls) and Mohammad Kashan (25 off 36 balls) as they added 69 for the first wicket. Talha Ahsan (30 off 62 balls) then anchored the innings but the fall of wickets in rapid succession didn’t help their cause.

The spin trio of Uzair Ali (3-12), Sameer Ahmed (3-23) and Zohaib Masood (2-33) pulled it back for The Educators School with some intelligent bowling.

Opener Mubashir Nawaz, who stroked 11 boundaries in his unbeaten 77 off 87 balls, guided The Educators School to a comfortable six-wicket victory as the winning runs came with 11.2 overs to spare. He was adjudged Man of the Match, having dominated the 132-run second wicket partnership with Taha Mahmood (40 off 51 balls) to seal the fate of the match. Off-spinner Abdul Rafay’s three-wicket haul was not enough to change the course of the proceedings.
readmore »»