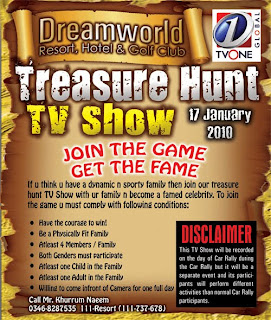 Over three hundred entries are expected in the tenth edition of the Dreamworld Treasure Hunt Car Rally 2010 to be held in Karachi on January 17.

The car rally is being organized by the Team Dreamworld for the tenth year running in what has gone on to become one of the most sought after annual events of the metropolis in which over 1800 cars have participated in its decade-long history.

The rally comprises of a 70-kilometer lap crossing almost all popular locations of Karachi, one of the largest cities of the world, and the lap is distributed among eight check points to let vehicles follow the concept of safety through limited speed.

The time check points are established at different locations in the city with each check point providing the contestants with a clue or a puzzle which should be solved in order to discover the next checkpoint for ultimately reaching the fortune at the Dreamworld resort. Each check point registers the time for each car in for which the points are awarded to the contestants for efficient time management.

The final destination of this treasure hunt would be the Dreamworld Resort where, after a ceremony of fun and entertainment, the final winner would be announced on the basis of the time management points awarded with dozens of prizes.

Handsome cash rewards to the tune of Rs 150,000 await the outstanding performers while there would be consolation prizes for every participant of the car rally.

The oldest model as well as the latest model cars will be given Rs 15,000 each with another Rs 15,000 purse reserved for the best decorated car.

Every participant would be getting a share in the numerous discount vouchers on offer while complimentary meals, soft drinks and energy drinks will also be arranged for the participants besides gift hampers containing various items for every car. 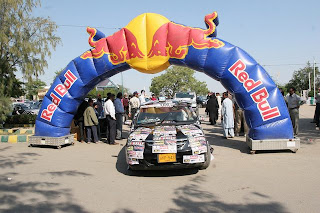 It may be recalled that a record number of 254 families had participated in the Dreamworld Treasure Hunt Car Rally 2009 that was hailed as one of the most memorable sporting extravaganza in town. The event was aired on ATV in 2 episodes of 40 minutes each.

Dreamworld Resort has emerged as one of the leading sports clubs of the country besides offering numerous other facilities to its members. It’s located adjacent to Gulshan-e-Maymar, off Super Highway. It is indeed accessible from all parts of the city and the driving time has reduced substantially with the construction of so many flyovers and underpasses of late.

It’s very heartening indeed to find so many sporting events being held at the Dreamworld Resort from time to time. From car rally to cricket and from cue sports to mind sports they remain on the lookout for bringing in more life at the resort. Their golf course is also a centre of attraction. readmore »»