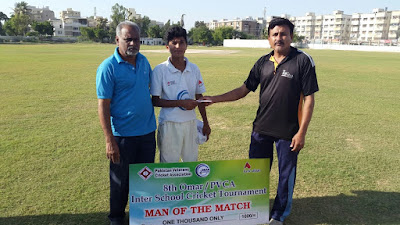 Electing to bat, after winning the toss, St Paul English School reached a competitive total of 232 for eight in the allotted 40 overs, largely due to the hefty contribution of 65 extras, which included as many as 51 wides sent down by the Qamar-e-Bani Hashim School bowlers.

Openers Omar Abdullah (26 off 37 balls) and Wakeel Hussain (18 off 61 balls) added 78 for the first wicket and the momentum was sustained by Khizar Khalid (30 off 29 balls). A middle-order collapse derailed them momentarily and the late flourish was provided by Abdullah Tariq who smashed an unbeaten 26 off 17 balls.

Medium-pacer Ali Akbar (3-55) was the most successful of the Qamar-e-Bani Hashim School bowlers with off-spinner Faris Hussain (2-28) and leg-spinner Haider Ali (2-57) also getting vital wickets.

Chasing a target of 233 in 40 overs, Qamar-e-Bani Hashim School could not recover after losing the top half of their batting for only 64. They were eventually bowled out for 129 in 29.4 overs with only Kazim Hussain (23 off 47 balls) and Ali Akbar (20 off 34 balls) offering some resistance.

St Paul English School’s left-arm spinner Sohaib Sameer (4-28) wrecked the middle-order to be adjudged Man of the Match. The earlier damage was done with the new ball by medium-pacers Hamza Ali (2-23) and Omar Abdullah (2-28). 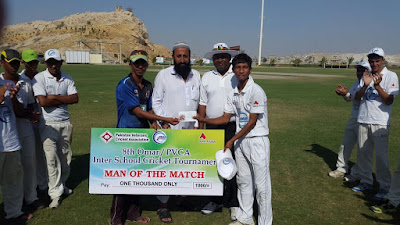 In the other game of the day, Oasis Secondary School overcame a shaky start to post a total of 189 which they were able to defend successfully against Al Fatima Academy to win the match by a comfortable margin of 97 runs.

Set a target of 190 in 40 overs, Al Fatima Academy lost the plot early to be routed for only 92 in 21.5 overs with leg-spinner Talha Ahsan returning the impressive figures of five for 16 to clinch Man of the Match award. He was assisted by left-arm spinner Abdul Mannan (3-20) and medium-pacer Abdul Karim (2-21).
readmore »»