England were rewarded for their positive approach as they overwhelmed Australia by a staggering margin of an innings and 71 runs in the second Test of the ongoing Ashes series at the Adelaide Oval.

It ‘s basically the change of the mindset of the English team which has led them to dominate the proceedings after an uncertain start to their campaign of retaining the Ashes. Aggression was something alien to them when it had come to taking on their arch-rivals. 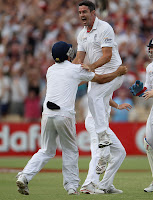 England have done their homework much better this time and they have arrived Australia in a very positive frame of mind. They have already brought the hosts under enormous pressure, something that had not happened for a very long time.

Although the first Test at the Gabba in Brisbane had ended in a draw, it were Andrew Strauss and his boys who earned more points than losing. The mammoth partnership between Aliaster Cook and Jonathan Trott led the turnaround and Ricky Ponting was left pondering how things went that far.
The Australians would not have imagined claiming just one wicket for 517 runs in England’s second innings no matter how much the pitch had eased and how friendly the conditions had become for batting.

It went to the credit of England not to have gone into a shell after having conceded a substantial first innings lead. On their previous tours of Australia during the past couple of decades they were guilty of playing to save the game generally rather than possessing the self-belief to down the opponents.

England were not being expected to go so hard at the Australians while in arrears and their aggression made immediate dividends. The bowling combination that had looked potent in the first innings was looking just ordinary when attacked.

England picked up in the second Test from where they had left in the first Test. They bowled aggressively on the opening day to send the hosts crashing to 245 all out in their first innings on a perfect batting track.
It was over to the England batsmen and they were in no mood to let the opportunity go. They didn’t let the Australian bowlers settle down and the scoreboard kept ticking over far too quickly to worry Ponting.

Cook was on song again and then Kevin Pietersen, due for a big knock for sometime, took over. The setting was perfect for the dashing right-hander to force the bowlers into submission. His double century allowed England to get a huge first innings lead. More importantly they got the score of 620 for five in quick time to give their bowlers enough time to apply the pressure despite the threats of rain.

I don’t think Strauss had delayed the declaration by extending the innings on the fourth morning for he wanted to have enough runs on the board to take out the possibility of batting a second time.

Not surprisingly the Australians did offer resistance and the fourth wicket stand between Michael Clarke and Michael Hussey did raise hope of the home side running away with a draw but it was Pietersen again who broke the threatening partnership in the final over of the fourth day.
Australia had six second innings wickets in hand at the start of the fifth and final day’s play but England needed just 90 minutes or so to complete one of their most famous victories of the recent times. Off-spinner Graeme Swann turned the ball alarmingly to claim another five-wicket haul and create doubts in the minds of the home batsmen for the remainder of the summer.
readmore »»