The Pakistan Billiards & Snooker Association (PBSA), after being denied financial support by the Pakistan Sports Board (PSB) and the Government of Punjab, has been obliged by the Government of Sindh, having taken the responsibility of sponsoring the cueists, both of them belonging to Punjab, for the World Under-21 Snooker Championship 2012 to be held in China from July 14 to 22. 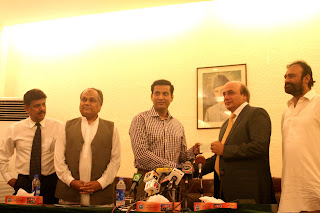 It’s indeed an unprecedented move in which a provincial government has come out to extend financial support to athletes belonging to a different province in the larger national interest.

In his brief speech on the occasion, Faisal Sabzwari revealed that the PBSA had submitted the request to meet the total cost of participation of the two cueists, being Rs 493,000, but it took quite an effort on part of his Ministry even to get the 50% of the cost because of the budget constraints.

“We have decided to sponsor the two teenaged cueists, Hunain Aamir and Mohammad Majid, for the sake of the country’s representation in a global event which will be helpful in promoting Pakistan’s soft image abroad. This act of ours will also send positive signals to the youth of the country that the government does go beyond lip-service,” the Sindh Youth Minister remarked.

“Our department, despite meager resources, has been following multi-dimensional approach having been prepared to go the extra mile for creating opportunities for youth as we have just demonstrated by sponsoring two young cueists from Punjab,” he added.

Shoaib Ahmed Siddiqui, in his welcome address, described the sponsorship of the Punjab cueists by the Government of Sindh as setting of a new trend.

“Both of them are exceptionally talented cueists. They are currently been trained and coached by Mohammad Yousuf, a former world champion, in Islamabad. They have tremendous potential and we are confident that they will bring laurels for the country in future,” Alamgir Shaikh reckoned.
readmore »»