The Duckworth-Lewis system, being used for the games shortened by weather, might have looked even stevens in the majority of cases in the One-day Internationals but it offers huge advantage to the side batting second in Twenty20 Internationals as England suffered at the hands of the West Indies once again.
One could understand the sentiments of the England captain, Paul Collingwood who was left fuming at the DL because it played the decisive role in his team’s defeat against West Indies for the second World Twenty20 running.
"There's a major problem with Duckworth-Lewis in this form of the game. I've got no problem with it in one-dayers, and I know it's made me very frustrated tonight because I've come off the losing captain, but it's certainly got to be revised in this form,” Collingwood said. 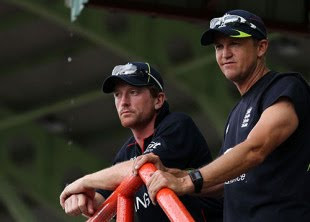 "Ninety-five percent of the times when you get 191 runs on the board you are going to win the game. Unfortunately Duckworth-Lewis seems to have other ideas and brings the equation completely the other way and makes it very difficult," he reckoned.

"I'm trying to take the emotion out of that defeat to be honest with you. It's the second time it's happened to us against West Indies so it's very frustrating for the boys because we've played a near-perfect game and still lost," he conceded.

"I think that's what the equation is built around in the one-day format. Unfortunately there’re probably not enough games. I'm not a mathematician, I don't really know what the equation should be, but your backs are certainly against the wall when it's like that," Collingwood added.

His West Indian counterpart, Chris Gayle, agreed with his concerns about the DL system. "I think it's something they're going to have to look into. I would support what Collingwood just said. I could have been in the same position as well. It's something that can be addressed so it can be even stevens for both teams in the future. I'm happy but it's just unfortunate for England,” the victorious captain stressed.

"We knew that the weather was going to play a part so the first five overs, obviously, can determine the game. So we decided to go out and see what we could get out of the first five overs. The target was actually 43, I think, at one stage and the adaption went in our favour. After the rain we knew we were most likely to win the game from there on," Gayle added. 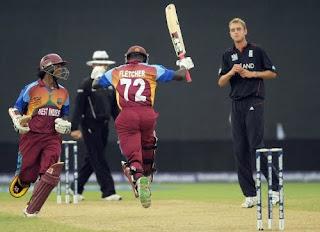 It was really cruel for England to have lost the game after having piled up an imposing total of 191 for five in the allotted 20 overs. They were in the driving seat but rain intervened after 2.2 overs of the chase and when play resumed, the hosts were left needing 60 from six overs with all 10 wickets in hands.

It was the second time in nine months that England had been at the receiving end of the DL system against the same opponents. During last year's World Twenty20 at The Oval, a rain break had reduced the West Indian target to 82 from eight overs which they chased down successfully.
readmore »»