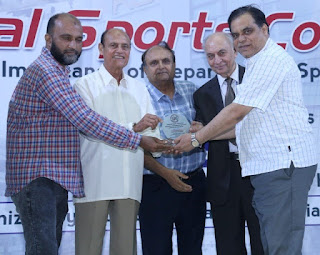 While almost every other speaker condemned the previous government, headed by Imran Khan, a former cricket captain, and blamed the outgoing premier for bringing about the downfall of sports in Pakistan, the noted journalist and author, Syed Khalid Mahmood, did not mince words in declaring that the so-called administrators and organizers, holding office for decades by hook or by crook, were chiefly responsible for the steep decline in country’s sporting standards.
The occasion was the National Sports Conference, organized by Sports Journalists Association of Sindh (SJAS), at the Scouts Headquarters in Karachi on June 29.
“Why criticize any Prime Minister or Head of the State for the debacle in sports when the entire system has flopped due to the mafia which has controlled sports for 75 years now? Prime Ministers come and go but the vast majority of these office-bearers of federations and their affiliated units occupy the chair for lifetime which is indeed a pity,” Khalid Mahmood felt.
The speech, in which he critical of the role of the long serving officials of the Pakistan Olympic Association (POA), was hailed as the one which brought to light the real facts instead of just talking about the departments and their role over the years. He talked more about the leadership aspect in sports and expressed the hope that better sense will prevail in future as far as running the sports bodies was concerned.
The Chairman of the Pakistan Billiards & Snooker Association (PBSA), Alamgir Anwar Shaikh, hockey Olympian Islahluddin, former Test left-arm spinner Iqbal Qasim and ex-President, Karachi City Cricket Association (KCCA), Prof Ejaz Ahmed Farooqui, were among the speakers besides senior journalists Rashid Aziz, Mirza Iqbal Baig and Waheed Khan. The proceedings were conducted by Asghar Azeem of the SJAS while the Secretary, Shahid Saati, proposed the vote of thanks. Shields were presented to the speakers at the end of the session of speeches.
readmore »» 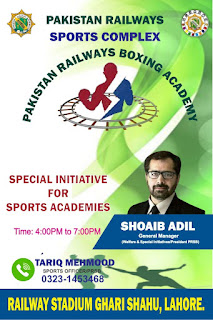 Shoaib Adil, General Manager of Railways’ Welfare and Special Initiatives and President Pakistan Railways Sports Board, has described sports as world’s most powerful moral and social power whose utility and importance has always been in every era since the ancient eras.
He made these observations on the eve of Railways annual sports gala which start from June 4 at the Railways Sports Complex located in Lahore’s Garhi Shahu. He pointed out that while food, work and comfort were the necessities of life, sports were like a pillar which guaranteed the strength and stability of life.
“In every part of the world, people of all ages, gender and all status of life have been participating in sports whether collectively or individually,” he stressed.
Shoaib Adil observed that in today’s era, while mobile phone or the smartphone was the source of wide relations and acquisition of knowledge, it had affected the human health as well and it’s imperative to divert the energies towards healthy activities overcoming the unnecessary utilization of cellular phones.
The sports, he viewed, while serve as mean of providing peace, comfort and delight on one hand, these refresh the human mind on the other.
“In the field of sports, people make their practical lives successful and in view of this they have introduced 12 new sports academies in its Sports Complex where any person of any gender or age can take admission and make their living happy and healthy,” he said.
readmore »»