Off-spinner Mohammad Abbas returned a five-wicket haul to script Fahad Academy’s convincing 10-wicket victory over Fatimiyah Boys School in their Group B fixture of the Omar Trophy Inter-School Cricket Tournament 2016, being organized by the Pakistan Veterans Cricket Association (PVCA), at the TMC Ground on September 26. 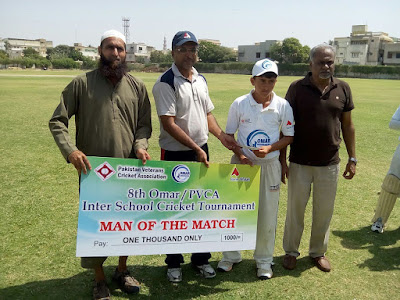 Mohammad Abbas, declared Man of the Match, delivered a sensational eight-over spell to send Fatimiyah Boys School crashing to 67 all out in 22.3 overs.

Fahad Academy didn’t lose any wicket in overhauling the modest target of 68, doing it in a matter of 7.4 overs.

Put into bat, Fatimiyah Boys School got off to a cautious start with openers Ghulam Abbas (9 off 18 balls) and Ali Haider Bawa (5 off 30 balls) adding 23 for the first wicket.

After having seen off the first six overs of the medium-pacers, Fatimiyah Boys School lost the plot with the arrival of the spinners. From 23 for no wicket they slumped to 67 all out, with all 10 wickets falling for just 44 runs in 16.3 overs.

Off-spinner Mohammad Abbas was their wrecker-in-chief, claiming five wickets for 22 runs, while leg-spinner Rashid Khan (2-4) and left-arm spinner Mohammad Umair (2-19) sustained pressure from the other end as none of the Fatimiyah Boys School could reach double figures with the highest contribution coming from extras (26) which included 25 wides.

Chasing a target of 68 in 40 overs, Fahad Academy began with a bang as openers Hammad Hasan (31 off 26 balls) and Mahmood Shah (18 off 20 balls) taking only 7.4 overs to complete the easiest of victories which meant they had as many as 32.4 overs besides all 10 wickets in hand. They were also assisted by a healthy contribution of 20 extras, including 16 wides.
readmore »»