History repeats itself as India mauled at Christchurch 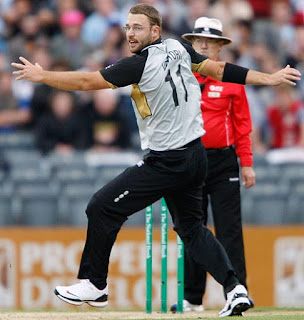 By Syed Khalid Mahmood
The Indians have done it again. They have surrendered once more to New Zealand when they were least expected to be at the receiving end. There was hardly any comparison between the two teams but the India lived to the reputation of gifting matches to New Zealand and the hosts emerged triumphant in the first Twenty20 International at the AMI Stadium, Christchurch.
Cricket is an unpredictable game and its shortest version can produce unexpected results. Yet the manner in which the Indians were outplayed in Christchurch suggested that even Mahendra Singh Dhoni’s boys are not prepared to bring about a change for the better yet.
Yes the Indian teams have struggled in New Zealand in the past as well. But did India ever possess such a dynamic set of cricketers who could win matches on their own. Without any shadow of doubt it’s the strongest-ever Indian outfit to have arrived in New Zealand. It had looked extremely unlikely that they would also suffer similar fate as the past Indian teams.
The Indians had escaped disaster in the one-off Twenty20 International in Colombo earlier in the month when they were rescued by the Pathan brothers after a horrible middle-order collapse.
The middle-order succumbed once more after a glorious start. One couldn’t have expected a brighter start as Virender Sehwag smashed three successive sixes in the opening over of the game. He had announced his arrival in New Zealand with his trademark aggressive instincts and his teammates should have derived inspiration from him.
India have been one team that relies heavily on their openers and the top-order batsmen because they cannot trust their luck of having a go in the death overs and getting away with it. More often than not they have scored briskly in the earlier part of the innings in the limited overs games only to be restrained in the final phase.
The failure of Rohit Sharma, Yuvraj Singh and skipper Dhoni derailed India’s progress and the Pathan brothers could not repeat their heroics of Colombo. It was left to number three Suresh Raina to anchor the innings and he did the job to the best of his abilities.
Not surprisingly once more the Indians were undone by a spinner. The New Zealand skipper, Daniel Vettori, must to hoping to more frequently to play against India to improve his own personal record. Isn’t it funny that the Indian batsmen, who grow up back home playing spinners of the highest quality, struggle against the foreign spinners in nearly every part of the world. 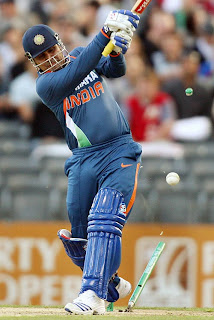 The Indians were always going to be tested while defending 162 at a ground having short boundaries. Ishant Sharma and Zaheer Khan, acclaimed as the best new-ball pair in the world, bowled with venom but they could not produce spells that could have brought their team back into the game.
The New Zealanders, not having any big names to create pressure on the bowlers, were not overawed by the occasion went about their task in a clinical manner. The victory came without any trouble in the end.

It remains to be seen if the same pattern will follow throughout India’s tour of New Zealand or the visitors will try to do justice with their talents.