Ijaz Butt has strong connections in the corridors of power and he has appeared least bothered about managing the affairs of Pakistan cricket in a professional career throughout his two-year tenure. 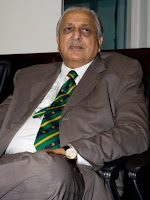 New records of nepotism and corruption have been created in his era and yet he has the burning desire to seek extension. He has brought the Pakistan Cricket Board (PCB) at the brink of disaster. If he’s allowed to rule a little longer it will come as little surprise to find Pakistan touching new lows.

The International Cricket Council (ICC) has issued a strict warning to the PCB to implement a series of measures to solve problems faced by the country’s cricket or risk sanctions.

“The PCB must act and be seen to be acting to uphold the zero-tolerance attitude to corruption in sport and conduct a thorough review of players’ integrity, educate them, implement a process and introduce an anti-corruption code in their domestic cricket,” the ICC said in a statement after their recent two-day board meeting in Dubai.

“If the PCB fails to carry out the above to the satisfaction of the board within the next 30 days, the board will consider what further action (including, if appropriate, sanctions) is required in the circumstances,” it said.

The Pakistan cricket was rocked by allegations of spot-fixing in during the recently concluded tour of England, resulting in two separate inquiries. The ICC has ruled there was no evidence of spot-fixing in the third one-day international between Pakistan and England last month but another inquiry, relating to the Lord’s Test against England in August, is pending.

The trio of Salman Butt, Mohammad Asif and Mohamnmad Amir was provisionally suspended by the ICC after alleged to have taken money from a book-maker to deliberately bowl no-balls in a Test match.

A couple of the top former Pakistan cricket administrators were critical of the ICC for having warned the PCB to take extraordinary measures to avoid sanctions over alleged corruption.

“It is damning. It means that the ICC has publicly called that PCB has to regain confidence of the ICC, and put them under pressure to take serious steps,” Ehsan Mani, a former ICC President, was quoted as saying.

Khalid Mahmood, who headed the PCB for a brief period in 1999 when the organization had as many as five different chiefs, described the ICC warning was an insult to Pakistan.

“The ICC warning is an insult to the whole nation. This step of the ICC is an evidence of inability and incompetence of the PCB officials and they have clearly mishandled the whole situation,” he remarked in an interview.

“ICC has cleared Pakistan of any corruption in the Oval one-day, Scotland Yard has yet to level any charges on the Lord’s Test inquiry, under these circumstances the ICC warning is biased and unjustified,” he felt.

Both these gentlemen appeared justified in defending the integrity of the nation but they should also have publicly condemned Ijaz Butt to have brought Pakistan to this stage where anything could happen.
readmore »»