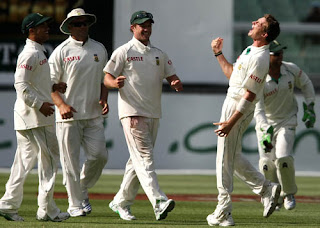 What a moment for the South African cricket! Their come from behind win in the second Test at the historic Melbourne Cricket Ground has allowed them to seize the series with a game in hand.
It’s their first-ever series win in Australia. More than anything, as the victorious skipper Graeme Smith recognized in the presentation ceremony, it was the self-belief of the South Africans that powered them to a convincing nine-wicket wicket on the final afternoon after being precariously placed just a couple of days ago.
The record ninth wicket partnership between J P Duminy and Dale Steyn on the third day led the turnaround and they didn’t look back once they had regained control. Like any other great team the South Africans went very hard at their opponents and forced them to submission.
It was quite an extraordinary Test match, befitting the occasion. It was a typical Boxing Day Test with big crowds and they were treated to cricket of the highest quality on all five days. You couldn’t have expected greater entertainment.
There was plenty to cheer for the Australians on the first couple of days but they clearly became the second best side in the field after the rearguard action of the South African led by Duminy who got overwhelming support from the lower-order batsmen.
Continuing with the second best, South Africa find themselves at a striking distance of displacing the Aussies from the top slot in the ICC rankings. Australia would be relegated to the second position and South Africa would be crowned as the new world leaders if the result of the third and final Test at Sydney is not any different from the first couple of games.
It would come as little surprise if South Africa do complete the whitewash at Sydney. In fact they appear to be in a very good position to do some more damage to the stature and reputation of Australia.
Ricky Ponting is in all sorts of trouble. He has continued to bat well in crunch situations but his teammates have lacked the consistency to trouble the South Africans who have stamped their authority with hints of conviction.
Ponting must have learnt that it’s a different ball game against motivated sides like South Africa and India. Earlier in the season his team was whacked in the Test series in India and now South Africans have humbled them in their own backyard. The Australian skipper must have wished there was a longer series against a team like New Zealand where they could dictate terms and relax.
It would be quite a challenge for Australia to prevent a whitewash in the series in the present scenario. The South Africans have an edge over Australia in every single department of the game and they would dearly love to complete a clean sweep at Sydney. 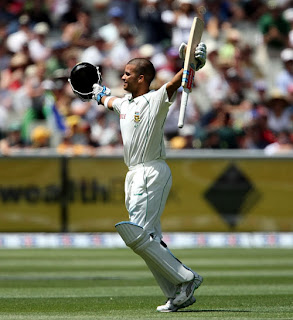 Coming to the success of the South Africans, on verge of becoming the top ranked side in the world, they have discovered an immensely gifted middle-order batsman in the shape of the left-handed J B Duminy who has class as well as character. His magnificent century in the pressure-cooker situation in only his second Test announces the arrival of another star on the horizon.
Dale Steyn, the lion-hearted fast bowler, has performed exceptionally well throughout the year and there’s every indication to suggest that he would continue hitting headlines in the years to come. His ten-wicket haul, besides that fighting knock, has earned him the Man of the Match award in the Melbourne Test.