England climbed to the top position in Test rankings after humbling India at home last summer but their capitulation inside three days in their very first outing since then has suggested that they didn’t deserve this honour.

Officially England may be the number one team in the world but they proved once again in the first Test against Pakistan in Dubai that they still remain vulnerable away from the comfort of home.

England, more like New Zealand, have had the tendency of getting disheartened much more quickly while playing in challenging conditions. Australia and South Africa, on the other hand, have had rough and tough characters guiding them through without too many hassles.

England have lacked resilience and the mental toughness. It was an extension of the same story in the Dubai Test where they paid the price of losing the intensity far too early and throwing away the game without offering a fight of any kind.

"It's a big victory for us against the No. 1 side in the world, a confidence-building win. We can expect a tough time from England in the next Test. That is something that makes you No. 1. They have quality cricketers. Their bowling attack has fighters and they will come back hard," Pakistan’s skipper Misbah-ul-Haq reckoned after the sensational 10-wicket win.

That’s Misbah’s observation. He is doing the right thing by not under-estimating his opponents but I don’t think England have the firepower to stage a forceful comeback in the remaining two Tests.

How will England find a clue to tackle off-spinner Saeed Ajmal who destroyed them with the figures of 10 for 97? How will they score heavily if they are unable to take care of the other bowlers like Umar Gul, Abdul Rahman, Aizaz Cheema and Mohammad Hafeez, who snared the remaining 10 wickets without giving much away?

England, under Andrew Strauss, had recovered after their 267-run loss to Australia in Perth in December 2010. It looks extremely unlikely, however, to find them regrouping against Pakistan after the debacle in the first Test at Dubai. 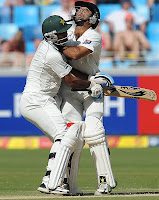 "In both innings we didn't apply ourselves as well as we should have done with the bat. You can scratch your head and ask why and come up with so many recriminations and questions. The most important thing is that the batsmen are very clear about their method and that they use that feeling of disappointment as motivation to make sure it doesn't happen again,” Strauss was quoted as saying in the post-match media briefing.

"It won't be a huge challenge to pick the team up. There will be a huge feeling that we haven't given a good an account of ourselves, and that will give us good motivation to come back in the second Test. We're a really tight unit. We win and lose together, you move on and it's a chance for us to show our resilience and character. I know we have those in abundance but we have to show that. Nobody likes losing that is for sure,” he conceded.
readmore »»