Myra Nur Lakdawala, a young and hard-working middle-distance runner from Karachi, has shown the promise to make it big in the years to come. The 17-year-old slim girl already holds the junior national record for 1,500 meters and 3,000 meters besides being in possession of every track record in school. 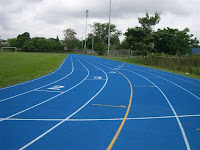 Recently, on September 28, she broke 5 minutes for 1,500 meters by running 4:56.4. This historic feat, recorded on video, should provide her more encouragement. She trains two times a day and runs about 65 kilometers every week.

Myra seems to be having the potential as well as passion to accomplish her cherished goals on the track. She has starting attracting the sponsors with her immense talent and performance. PIA and Nike generously contribute towards her clothing and travel needs. Not surprisingly she is receiving letters of interest for scholarships from universities in the USA.

Her story is indeed an interesting one which could inspire the young ladies folks of Pakistan. She is probably the first-ever for a school girl of the country to have entered into athletics record books. She is the only female track and field athlete that is aspiring to receive a scholarship from a university in the USA for athletics. She has already been contacted by one in California that is interested in her.

I recently had the opportunity of having a session with Myra and her school athletics coach, Scott Johnson. Their fierce determination and professional approach left very little doubt in my mind about the future being very bright indeed.

What make Myra unique other than her abilities are her ambitions. Her confidence level is sky high and she has faith in her talent. She is not afraid to train hard day in and day out and she has set high goals for herself.

Myra is looking forward to compete in the upcoming National Athletics Championship due to be held in her hometown, Karachi, next month. She then plans to travel to Scotland with the aim of breaking the all time indoor national record for 3000 meters for Pakistani women.

Syed Zahid Ali Rizvi, President, Sindh Athletics Association (SAA) described Myra as a potential national champion who could also earn laurels for the country when I approached him for his assessment about the youngster.

He seconded me that Myra possessed exceptional talents as a middle distance runner and her stint with the school athletics coach, Scott Johnson, will help the cause of the teenager immensely.

“I have seen her run in a junior meet and she was thoroughly impressive. She will surely emerge as the champion at the provincial level right now but she is likely to be tested at the national level where she would come across a few other talented girls from upcountry regions and departments,” Zahid Rizvi stated.

“Myra, however, is fortunate to be blessed with a professional coach at the school where she receives regular training under his supervision. A top class coach like Scott Johnson can make a lot of difference and this puts her at tremendous advantage. The youngster has the potential which would blossom with high-class coaching and guidance,” the SAA President remarked. 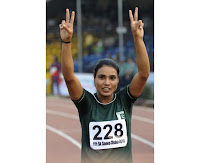 “We are confident that Myra will bring glories for the province in the very near future and if she continues working hard there’s no reason why she should not earn laurels for the country in future,” Zahid Rizvi hoped.

The SAA President agreed that athletics needed more role models and champions to inspire the young students to take it seriously rather than just going through the motions.

“We have Nasim Hameed who became the fastest women of South Asia only last year. She belongs to Karachi having learnt all the basics here. She possessed the talent and came up to make the entire nation proud. Her accomplishment should be a source of inspiration for all the emerging athletes of our country,” Zahid Rizvi concluded.
readmore »»