Pakistan unable to make most of Ponting’s suicide 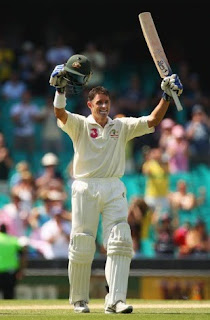 Ricky Ponting must be wondering what else he had to do to lose a Test match against the present Pakistan line-up devoid of mental toughness of international standard. The Australians were much below par in the second Test at the Sydney Cricket Ground that they managed to win by 36 runs against the heaviest of odds.

Only Ponting would be able to throw light on it why did he choose to bat first on the greenest pitch of the SCG in many years with the overcast conditions making batting the toughest of propositions on the opening day.

The kind of fast bowling attack the Australians possessed they would not have taken long to dispose of the tourists on the first day. They would have brutally exposed Pakistan’s weaknesses in the batting department.

There was not a single logical reason that would have prompted any captain winning the toss to bat first in the prevailing circumstances. As I said it’s only Ponting who would have known it. May be it was a team decision and the team management who desired putting their own boys instead of the opponents to test.

It was being believed that Ponting has stopped inserting the opposition after one of his such moves had backfired a few years ago. Well can we expect him to give playing hook shot after getting caught in the deep in the first innings of the Sydney Test. Certainly not. Therefore I don’t find any justification in not having put Pakistan into bat.

As it turned out the Australians were routed on the first day and as the weather improved on the following day Pakistan managed to post a much higher total than they would have been able to do a day earlier.

For all practical purposes the Australians had forfeited their first innings. Then they dropped catches to let Pakistan secure a lead that was into mammoth proportions. Or were they experimenting on winning a Test match after having conceded a first innings lead in the excess of 200.

The kind of batting form Ponting and his deputy Michael Clarke have been in during the summer there were remote possibilities of the hosts responding with a gigantic total as they used to do until a few years ago.

Not surprisingly Pakistan’s bowling had lost the bite when the Australians started their second innings with 206 runs in arrears. The solid opening stand between Shane Watson and Philip Hughes had laid the foundation for a big total but the failure of Ponting and Clarke undid their good work. 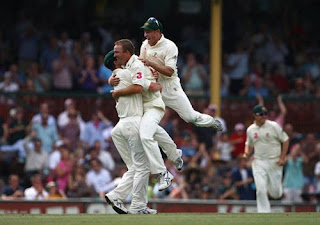 It’s not often that the Australians lose the plot so easily but they succumbed against the run of play to put themselves in a disastrous situation that was only retrieved by Michael Hussey who somehow found the desired support from tail-ender Peter Siddle.

Pakistan were always expected to struggle while chasing any target over 150 and there was not much element of surprise when they collpased on the fourth afternoon to surrender the series before the third and final Test.