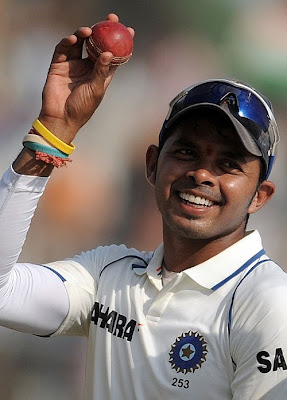 The magnificent centuries from the trio of Virender Sehwag, Gautam Gambhir and Rahul Dravid had set the tone for India in the second Test against Sri Lanka at Green Park, Kanpur, but it was the astonishing performance from fast bowler Shanthakumaran Sreesanth that translated the dominance into victory. He turned out to be hero of India’s 100th win in Test cricket.

Yes of all people it was Sreesanth, returning to Test arena after about a year and a half or so, who made the difference on a pitch where batting was more or less as straightforward job as the one in the preceding game at Sardar Patel Stadium, Ahmedabad, having produced a high scoring draw.

There were two reasons why Ahmedabad was not allowed to be repeated at Kanpur. Number one India were about 175 to 200 runs short of their first target that was to post a total in the region of 600. They could have still reached there, even after having lost four wickets literally for nothing in the first hour of the game, had Dravid not perished so early on the second morning.


Secondly Ishant Sharma and Zaheer Khan were unable to bring the Sri Lankans under any kind of pressure. In fact they leaked far too many runs in the early overs and there was no joy for the spin duo of Harbhajan Singh and Amit Mishra who toiled hard without success for many hours.

Zaheer provided India the breakthrough on the very first ball of the innings in the Kanpur Test and then his new ball partner Sreesanth took over. Although no more wicket fell on the second evening but unlike the previous game, the visiting batsmen were not allowed to score freely.

Sreesanth was on fire on the third morning. He bowled exceptionally well on a docile strip, catching the tourists by surprise. He did the damage on his own, not getting frustrated by the frequent playing and missing by the batsmen. Neither did his shoulders drop at watching the edges fly past the fielders.

He had to work very hard to earn all his wickets. Most importantly he didn’t lose his cool or composure. The momentum was with him and he knew it was matter of time for him to strike again and again. 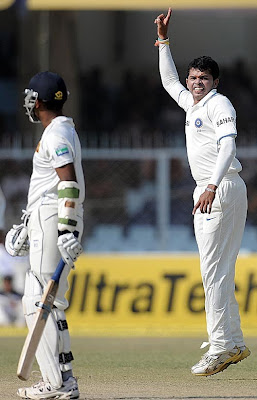 It’s not a common sight for an Indian fast bowler to do it on their soil where the pitches are tailor-made for the spinners more often than not. It was another docile track but the 26-year-old Sreesanth rose to the occasion in his comeback Test much to the delight of his captain Mahendra Singh Dhoni.

Sreesanth used his head as much as his firepower to knockout the batsmen. "This was a wicket where the faster you bowl the easier it is to bat. It was important to make the batsman play early and make him play late and it was a mixture of lot of deliveries. It was a slow track and I had to work hard. Hitting the stumps was more important. I told myself that I might go for runs but I will make them play every ball,” he explained.

"To be honest, I never thought I will play for the country again. But God has been very kind and I got the opportunity at the right time," the lion-hearted fast bowler remarked after making a stunning return to Test cricket.