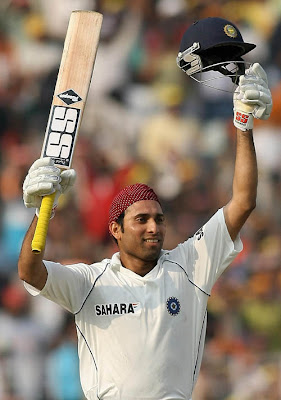 What a joy it has been following the career of VVS Laxman over the years. To me he is the most stylish batsman of the present generation. There is no better sight in cricket than to watch him bat.

He is one man who has all the time in the world to play his strokes. He has been blessed with the gift of timing that adequately covers the deficiencies in footwork. He may not be technically the most correct batsman but he is the one batter who can bring the crowd to its feet with his artistic stroke-play.

The fastest of the bowlers pitching the ball on or outside his off-stump have never been sure in which direction they would be hit when Laxman has been at the crease. While every other great batsman in the world would be content in cover driving those balls but you don’t know which route Laxman would take.

He may put the ball in the gap between cover and extra cover with precision and there is an equal chance of him rolling his wrist and on-driving it past mid-wicket. He has that knack of playing his stroke late that allows him to pierce the field at will.

Laxman has perfected the art of keeping the bowlers as well as the fielders guessing. The captains have often been found wanting in setting field for him. One can only sympathize with the fielding captains because it’s certainly not possible to have a ‘safe’ field for someone who has the rare ability of flicking the balls pitched well outside the off stump. 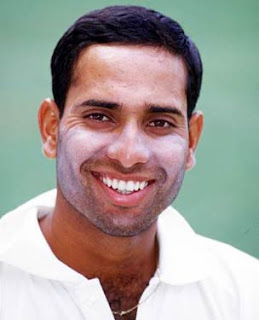 If you understand cricket you have to admire Laxman for doing justice with his initials VVS. He is certainly a very very special talent who is a born artist.

More than the runs and the centuries that he has scored for India, it’s his grace and poise that has distinguished him. He is the one and only batsman in the world at the moment whose graceful stroke-play passes the impression of being poetry in motion.

Laxman has scored prolifically against the toughest of oppositions. Not surprisingly his greatest knocks have come against Australia that has undoubtedly been the leading side in world cricket for the last many years.

Who would ever forget his epic knock at 281 against the Australians at the Eden Gardens, Kolkata, in 2001. The Indians were looking down the barrel and a series defeat looked round the corner. They had been defeated in the first Test and were forced to follow on in the second Test.

India needed something out of extraordinary to change the course of the proceedings. The follow-on fightback was led by none other than the Hyderabad touch artist who stood against the Australians with courage and purpose. His stroke-filled innings turned it around for India and the series was squared against all odds. By clinching the third and final Test the hosts managed to win the series they were most likely to surrender in the previous game.

More than seven years later Laxman scored another magnificent double century against the Aussies in his 99th Test at Feroz Shah Kotla Ground, Delhi. His defiant knock in the second outing saved the day for his team and earned the Man of the Match award for him.

He may not be a swift mover in the field, that has cost him his place in the one-dayers, but he still has fair amount of cricket left to him to delight the lovers of the game all over the globe.

He has played his 100th Test match at VCA Stadium, Nagpur. He would certainly regret his soft dismissal when in sight of another hundred that would have been a perfect gift for his fans in the landmark Test for him. 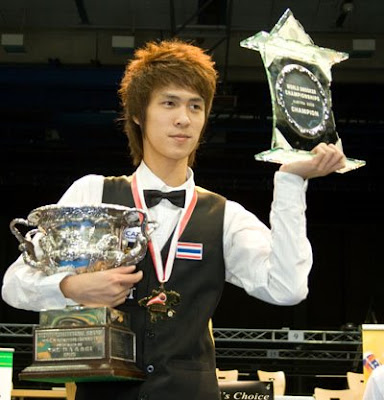 The Asians have once again proved their mettle at the international level in the game of snooker and three of the four semifinalists belonged to the continent. Thepchaya Un-Nooh of Thailand was crowned as the new world champion at Wels, Austria, on November 8.

The Asian cueists proved the point once more that the standard of cue sports was on the rise in their part of the world and the future belongs to them. Thailand and China are particularly the two countries having progressed in leaps and bounds in the cue sports arena in the recent past.

With more glories coming their way, the cue sports is certain to move to another level in Thailand whose administrators have been proactive over the years. The other Asian countries should derive inspiration from them.

China has also emerged on the scene as a cue sports giant. The performance of Sohail Vahidi may go a long way in boosting the game in Iran now.

There was disappointment, however, for both Pakistan and India whose cueists could not force their way into the semifinals despite looking good in earlier matches.

Pakistanʼs hopes of regaining the world title were resting on the shoulders of Khurram after the exit of the countryʼs premier cueist, Saleh Mohammad, in the round of last 32.Khurram, who had staged a magnificent comeback in his earlier game in which he trailed1-4 against Au Chi Wai of Hong Kong was unable to do it while facing Yu Delu who was in no mood to give it away.

Khurram did bounce back to clinch the third frame after having lost the first two but he could not do much to prevent the rampaging Chinese from pocketing one frame after another.

Khurramʼs defeat in the pre-quarters meant Pakistan returned empty-handed once more. Mohammad Yousuf remains the countryʼs only cueist to have won the world amateur title, having done it in 1994.

Saleh has come very close to accomplishing the mission on a couple of occasions but the world crown has somehow eluded him so far despite his big reputation in the international circles.

Indiaʼs former world champion Pankaj Advani was routed by Chinaʼs Xiao Guodong in the quarter-finals. Guodong toppled Advani 6-2 while the other three fiercely fought quarter-finals went to the full distance of 11 frames.

Sohail Vahidi of Iran edged out Marin McCrudden of Ireland while Colin Gilcreest outwitted Lee Page of England and Thepchaya Un-Nooh of Thailand outlasted Yu Delu of China in the other quarter-finals.