Yet another feather in Tendulkar’s cap

Sachin Tendulkar was adjudged the Cricketer of the Year, receiving the Sir Garfield Sobers Trophy during the 2010 ICC Award ceremony in Bangalore on October 6. He also received the People's Choice Award. 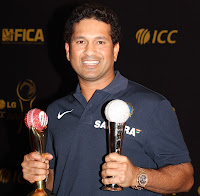 The kind of form Tendulkar has been in during the last season in particular he was tipped to clinch every award on offer. During the period under consideration for the award (August 24, 2009 to August 10, 2010) he Tendulkar scored 1064 runs at an average of 81.84 in ten Tests.

He made 914 runs in 17 ODIs at 65.28, and also scored the format's first double-century against South Africa in Gwalior. Tendulkar is presently third on the ICC's rankings for Test batsmen, and tenth in ODIs. 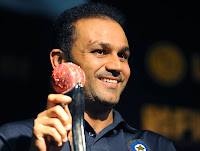 "This last season has been really special for the entire team. I think right from the start of the season, when we won in Sri Lanka and I scored a hundred in the finals, and from there on the season took off for us. We became No. 1 in the Test rankings, something we all wanted to achieve, and we've been able to maintain our performances in the last ten months," Tendulkar remarked on the occasion.

He recognized Gary Kirsten, the Indian coach, for played an important role in the success of all the batsmen. 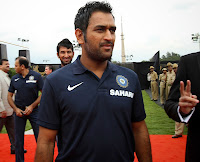 "He has been instrumental in making all the batters play plenty of deliveries in practice sessions, he himself throws thousands of deliveries. Gary has been able to keep us in the right frame of mind, whatever areas we needed to work on, he is making sure we are addressing that," Tendulkar reflected. 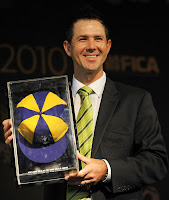 New Zealand’s explosive wicketkeeper-opener Brendon McCullum won the award for the best Twenty20 Performance of the Year, edging out Hussey, Mahela Jayawardene and Ryan McLaren, the others nominated for the Twenty20 award.