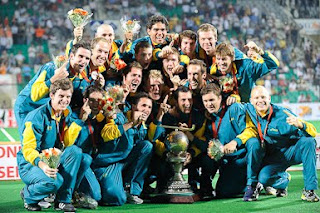 Australia finally managed to down Germany in a World Cup final. Having failed to do it on the past couple of occasions it was the turn of the Aussies to come out smiling after yet another enthralling final.

It was the third successive World Cup final between the two powerful hockey nations. Germany had succeeded in crossing the last hurdle in the last two finals but Australia emerged triumphant in the final of the Hero Honda FIH World Cup 2010 at Delhi’s Major Dhayan Chand Stadium.

Australia’s Ric Charlesworth earned the distinction of winning the World Cup both as a player and as a coach. He was a member of the Australia that captured the crown for the first time. Now he was the coach of the team when it has done it for the second time, after a gap of 24 years.

Germany came very close to completing a hat-trick of title wins. After having snatched the trophy in 2002 and 2006 they were at a striking distance of retaining it but the Australians dashed their hopes in the final.

As expected the final turned out to be very exciting and not surprisingly only one goal separated the two evenly matches outfits. Australia won the game 2-1 after having led 1-0 at halftime.

It was in the fitness of things that the two best teams of the tournament had made it to the final. Germany were the only undefeated team in the competition going into the final while Australia had staged a magnificent comeback after losing their opening game against England.

Australia’s worst match in the tournament was probably the one against Pakistan which they won and not the one against England which they lost. It was amazing to find the Australians struggling against a Pakistan side that was itself short of confidence.

The Aussies did secure a 2-1 win over Pakistan but it wasn’t the kind of performance that would have made them proud. May be it was the psychological pressure of playing against Pakistan that prevented them from playing to their potential in a game they were expected to dominate all the way. 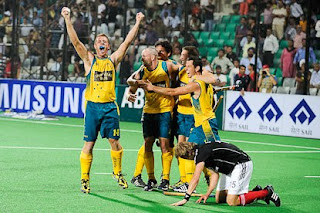 The match for the bronze medal, featuring the Netherlands and England, was a high scoring affair. The Netherlands were the winners by an odd goal in seven. England had to pay the price for wasting far too many opportunities, particularly penalty-corners.

England had become the first team to qualify for the semifinals, having made there with four successive wins but they crashed in both the knockout games to be denied of a medal.

None of the Asian teams could make it to the semifinals with Australia, Germany, the Netherlands and England sharing the top four positions. The fifth slot was also claimed by a European nation, Spain.

South Korea with sixth position proved to be the best Asian outfit with Argentina pushing hosts India down top eighth place. New Zealand, South Africa and Canada shared the next three positions with Pakistan finishing as the disappointing last among the 12 participants. readmore »»