The ICC U-19 Cricket World Cup 2010 will be getting underway on the birthday of a man called Rahul Dravid. While the stars of the future from all over the globe will start their campaign on January 11 the Indian batting great will be lighting 37 candles on his cake to celebrate the day.

The start of the tournament on the birthday of Dravid, one of the greatest-ever batsmen, could be a source of inspiration for the Indian young guns entering the big event as the defending champions.

Defending champions India will open its campaign against qualifier Afghanistan at Bert Sutcliffe Oval, near Christchurch on the opening day of the competition with Pakistan facing the West Indies in Palmerston North and the 2008 runners-up South Africa taking on Ireland in Queenstown.

Besides the 10 full members, there are six Associates and Affiliates teams taking part, having won through their respective regional qualifying tournaments as well as the global qualifier, which was held in Canada in September.

Meanwhile the U-19 Cricket World Cup 2010, to be contested by as many as 16 teams, was officially launched in Dunedin, New Zealand, on November 23.
The ICC Chief Executive, Haroon Lorgat, pointed to the competition’s track record as a launching pad for future stars.

“It’s been shown over and over that a number of players come through this event, and very shortly afterwards they are on the international arena in a meaningful way,” the ICC Chief Executive remarked.

Speaking at the launch function at University Oval, Dunedin, he recalled some of the current stars who have come up through the under-19 ranks, including New Zealand’s own Ross Taylor, who captained the national U-19 side at the 2002 event.

He also noted the swift rise of South Africa opener Hashim Amla, who went on to full honours after playing in the 2002 tournament in New Zealand, and fast bowler Wayne Parnell, who played in the 2008 tournament in Malaysia.

“Wayne Parnell had hardly finished playing at the Under-19 level when he was picked in the international side. This reflects the close migration from the ICC U-19 Cricket World Cup tournament to the international stage,” Haroon Lorgat observed.

He emphasized the importance of the ICC U-19 CWC and described it as one of the flagship events of the global game. 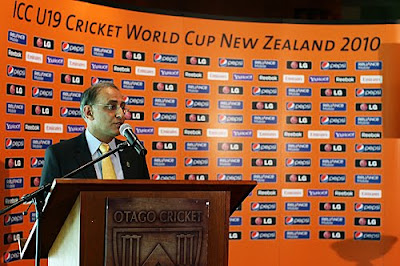 “It’s an extremely important event for us at the ICC. We have pencilled this in as one of our major events going into the future. The ICC U-19 Cricket World Cup deserves to be put alongside the ICC Cricket World Cup, ICC World Twenty20, ICC Champions Trophy and the ICC Women’s World Cup. This ICC U-19 CWC is the most important event that those under-19 players will play at this stage in their careers,” he stated.

He confirmed that the ICC was committed to growing the profile of the tournament, and was in negotiations to boost the level of television coverage for the event that will already see matches carried to a global broadcast audience of millions.

He expressed his total satisfaction with the preparations for the tournament, noting that New Zealand Cricket had an excellent track record of hosting major tournaments, including both the U-19 CWC (in 2002) and the ICC Women’s World Cup (1982 and 2000).