Victorious skipper Smith out of action for a while 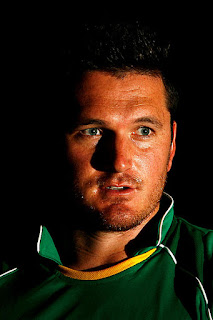 The loss of victorious skipper Graeme Smith, due to an elbow injury, will be a big blow to South Africa’s chances of pocketing the upcoming series of One-day Internationals against Australia.
Smith, a picture of courage and fortitude, had played the third and final Test at the Sydney Cricket Ground despite not being fully fit but he suffered another injury during the course of his innings on the second day and it cost his team dearly.

As usual he was dominating the Australian bowlers when he was hit on his gloves by Mitchell Johnson and he was force to retire. The South Africans were jolted by his non-presence in the field.

Having the scores of 48, 108, 62 and 75 in the previous four innings, he was in complete command of the situation when he had to leave the field abruptly. He did make an attempt to stay at the crease but the first-aid at the ground was not enough to treat the serious injury.

The complexion of the Sydney Test changed with the premature exit of Smith. The incoming batsmen tried to make up but none of them could play the kind of attacking knock the skipper was capable of playing. His knocks had been instrumental in guiding his team to victories in both the previous games.

South Africa, who might have entertained hopes of getting a first innings lead even after Michael Clarke and the tail-enders had extended the Australian total to 445, finished far too many in arrears to add to their discomfort.

Smith’s absence was felt in the field too when Australia came out in pursuit of quick runs in their second innings. It became evident soon that the acting skipper Neil McKenzie lacked the skills to handle the bowlers and set proper fields for them.

The best way of restricting the flow of run was by picking up the wickets but McKenzie appeared more interested in saving the boundaries by spreading the field. What he probably overlooked the fact that his fast bowlers were likely to be more effective when supported by attacking fields. 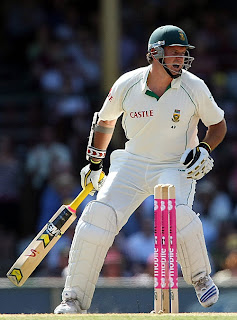 It was a pity to find a bowler of the caliber of Dale Steyn, who was adjudged Man of the Match in only the previous game, was left to operate with a solitary slip. The edges were found and they went into gaps. The South Africans would have been much better off playing normal cricket instead of going on to the defensive.

One is not sure if Ricky Ponting would have declared the innings as early as he did if Smith was fit. The Australian skipper bought more time for his bowlers by setting a challenging target. It could have been a different story to relate had Ponting delayed the declaration by adopting safety first approach.

Smith reappeared on the field only in the final session of the game in pursuit of salvaging a draw. He came out to bat at number eleven with more than half an hour’s play left. The wounded tiger refused to give up and it was only at the fag end when he picked by Johnson.

Smith’s batting and captaincy will both be missed in the ODI series but he had to take the break in an effort to be fit by the time these two teams resume their Test rivalry as early as next month.