Laxman, Zaheer script the most famous of all recent conquests

Although it would be unfair not to pass on the credit to the entire Indian cricket team for having brought off a spectacular victory over South Africa in the second Test at Kingsmead, Durban, to level the three-match series, at least two people came out with standout performance to script what must be the most famous of all their recent conquests. 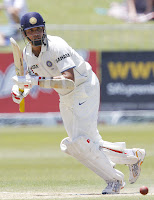 VVS Laxman was very rightly adjudged Man of the Match for having topscored in India’s both innings. On a pitch where nobody else from either side could reach a half-century he very nearly scored a century of his own in the second outing.

Zaheer Khan, who had missed the first Test due to injury, returned with a bang to spearhead the attack that had lacked both venom as well as purpose. His terrific bowling lifted the morale and performance of the team which resulted in one of the greatest-ever comeback victory by any team in cricket history.
I don’t know if many people gave the Indians much chance of squaring the series in Durban after having been mauled in the first Test. But they proved themselves against the heaviest of odds to register a comprehensive 87-run win the low scoring game.

Mahendra Singh Dhoni, we all know, cannot do much to change his luck with the coin. Hail the brave man for making it up with his courage and never say die approach. Any ordinary mortal would have been heartbroken after losing yet another crucial toss on a bowl first pitch. But he knew his men had the mental toughness to overcome such obstacles.

Isn’t it truly remarkable that India managed to pull off victory in the Durban Test even after being inserted by the home captain in the most teasing of conditions for batsmen? I tell you no other side in the world could have even come close to getting 200 with the ball seaming and bouncing so much on the first day.
The Indians showed that they have learned their lessons very quickly and their positive approach kept them ahead of the game. The first innings total of 205 was below par for the formidable batting line-up that they possesses but it still represented a fighting score and there was some cushion for their bowlers.

The Indian bowling attack, as expected, looked much more potent with the return of Zaheer and the South Africans were found wanting in application. The substantial first innings lead was always going to play a decisive role until the visitors were bundled out for a very low total in their second innings.

Virender Sehwag got India off to a flying start with his trademark attacking shots but the loss of four quick wickets opened up the game. It needed a brilliant knock from Laxman to put India back on top and they were the favourites when the target they set crossed the magical figure of 300.

The South Africans started their chase aggressively but the loss of Graeme Smith opened up the floodgates and with Harbhajan Singh extracting turn and bounce batting was never going to be easy.

The hosts were tested by the pace trio of Zaheer Khan, Ishant Sharma and Shantikumaran Sreesanth on the responsive pitch and the match ended with over a day to spare.
readmore »»