Nadeem Omar, the Managing Director of Omar Associates and the owner of Quetta Gladiators, has stressed on fair play and positive attitude as he formally inaugurated the 31st edition of the Karachi Gymkhana Ramazan Festival Cricket Tournament 2016 for the Omar Associates Trophy on June 4. 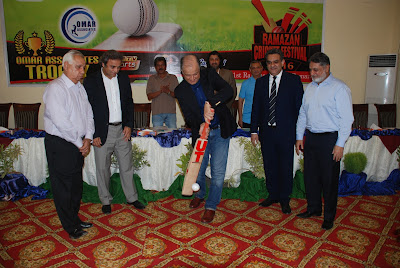 With Test wicketkeeper-batsman Saleem Yousuf standing behind him, he dead-batted a friendly half-volley in the corporate settings of the banquet hall which, on a cricket ground, he would have deposited it somewhere into the stands!

In his brief remarks on the occasion, Nadeem Omar, whose company is sponsoring the event for the fifth year running, hoped that other corporations and institutions will also come forward for patronizing sports.

“Sadly the federal budget for the upcoming fiscal year (2016-17), presented just the other day, doesn’t have adequate allocation for sports. Now the onus is on the private sector to promote sports in the right manner,” he reckoned.

“The Karachi Gymkhana Ramazan Festival is the oldest tournament in which the talented cricketers from all over the country get an opportunity to showcase their talents. We are happy to be associated with it,” he added.

Omar Associates (Pvt) Ltd, the promoters of Omar Cricket Club and Omar Colts, have also been managing veterans and women’s teams besides having its regular team which plays national-level tournaments. 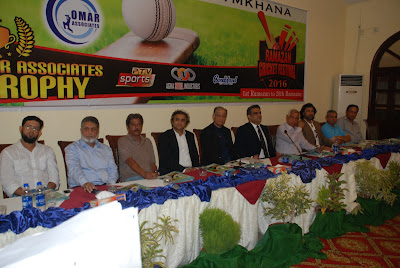 Meanwhile the prize money of the Omar Associates Trophy 2016, due to start at the Karachi Gymkhana Cricket Ground on the first day of Ramazan, has been enhanced.

The decision in this regard was taken by the President of the Karachi Gymkhana, Fawad Salim Malik, during the media briefing as he announced that the winners will now be getting Rs seven lacs instead of Rupees six lacs and the runners-up will be collecting Rs three lacs fifty thousand instead of Rupees three lacs.

The total prize money of the four-week event, whose final will be played on 28th of Ramazan, will be Rupees 13 lacs and eighty thousand, which is the highest in the 30-year-old history of the tournament.

In his welcome address, Fawad Malik described the Karachi Gymkhana as the premier sports and social club east of the Suez Canal, which took pride in its legacy and heritage. He made a particular mention of its cricket ground, having hosted a few of Pakistan’s famous matches.

Altaf Hussain Agha, a former President of the Karachi Gymkhana and also the Director of the Tournament Committee, spoke about the plans to install floodlights at their cricket ground later this year.

Riazuddin, an international umpire of repute and member of the technical committee, disclosed that all the T20 rules and regulations of the International Cricket Council (ICC) and the Pakistan Cricket Board (PCB), including Duckworth-Lewis method for shortened matches, will be applied during the tournament.

As in the past, tournament will be contested by a total of 16 teams, having been divided equally in four groups for the preliminary rounds. This includes five new teams, Anees Hussain Cricket Club, Dawood Sports, Sojhula Cricket Club (Dera Ghazi Khan), Atiq Estate and Shahmil Associates, who will be making their debut in the competition.

The top two teams from each group will qualify for the knockout phase, starting with quarter-finals. For the preliminary rounds, Omar CC has been drawn in the Group A alongwith Medicam, Mohammad Hussain CC and K-Electric while the Group B comprises of Karachi Gymkhana Whites, Sojhula CC, Atiq Estate and Eaton CC.