Posted by Syed Khalid Mahmood at 3:52 PM .
0 comments
Labels: Asia Cup, Hockey
By Syed Khalid Mahmood
South Korea proved themselves the best team of the continent by regaining the Asia Cup hockey title at the Kuantan Hockey Stadium in Malaysia. Having claimed the gold medal in the Asian Games in Doha a couple of years ago they now have completed a rare double. They have also secured their place in the 2010 World Cup to be staged in India. 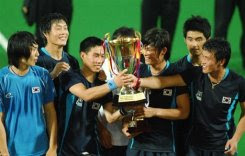 The Koreans were made to work extremely hard to earn a 1-0 victory over three-time champions Pakistan in the final with the winning goal coming just five minutes before the scheduled closing time of 70 minutes. Obviously the match would have gone into extra time, had that goal not be scored or for that matter if Pakistan equalized in the last five minutes which they couldn’t.
Not surprisingly the goal that settled the issue was scored by drag flick specialist and the man of the moment Kim Byung-hoon, who also finished as the tournament’s top scorer with six goals.
The Player of the Tournament award, however, was clinched by his teammate You Hyo-sik while another Korean, Hon Eun-seong, was declared Man-of-the-Match in the final.
The tournament brought glories for the Koreans and their coach Cho Myung-ju could not have desired a better start to his stint.
“Our team's superior attacking in the second half proved decisive. We were confident and expected a close match. The win will spur us for further success in the coming year," the new Korean coach remarked at the end of the final.
The Pakistan coach, Shahid Ali Khan, reckoned that his team's defeat coincided with their best performance of the tournament.
"We had good control of the match and ample chances to score. We are on the right track and we have improved with each match. We will only get better from here," he was quoted as saying.
There was no cause of disappointment for Pakistan as far as the end result was concerned. They in fact exceeded expectations by having made it to the final after having overpowered teams like India and Malaysia and holding China, who eventually claimed the bronze medal, to a draw.
While the forwards came up with awesome display the performance of penalty corner specialist, Sohail Abbas, left a lot to be desired. The world record holder for the highest number of goals in international matches could score only one goal in the tournament and failed to capitalise on the three penalties that Pakistan earned in the final. 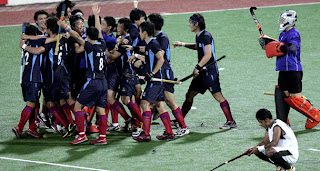 The defeat in the final now forces Pakistan to compete in the World Cup qualifiers to be held in November with China, Malaysia and Japan also in the fray.
India, having failed to qualify for the last year’s Olympic Games in Beijing, are assured of a spot in the next year’s World Cup by virtue of being of the hosts but they had yet another forgettable outing.

The defending champions were not even able to make it to the semifinals after failing to deliver in the league matches against Pakistan and China. They still have a long way to go to regain their position as one of the top teams in the hockey arena.