There’s no element of doubt in anyone’s mind about Sachin Tendulkar being the most prolific run-getter in Tests as well as One-day Internationals. He holds the record for the highest number of runs and centuries in both the formats of the game which is indeed commendable.

But what has remained questionable on many occasions is his commitment to the cause of the team. He has been guilty of letting India down on numerous occasions in an otherwise glittering career.

His world records certainly bring joys to the millions of his fans all over the planet but his ‘consistent’ failures in crunch situations make many believe that he’s more into personal glories than team’s interests.

For nearly a year now his anticipated 100th ton in international cricket has been hurting India very dearly. It has cost them seven successive Test defeats overseas with the eighth one expected at Adelaide.

It has been said and written on numerous occasions that the historic milestone was just a matter of time for the master batsman. Who will ever argue about it? Anyone having scored 99 centuries will definitely be expected to complete a century of centuries.

But so much hype has been created about it ever since he scored his 99th century against South Africa during the World Cup last year. He has had innumerable opportunities of getting it but for some reason or the other the landmark has eluded him so far.

In normal circumstances it should not have mattered how many innings he took to do it finally but the consecutive defeats have led many ordinary mortals to believe that there’s something wrong somewhere.

I think now it’s a matter of time when the cricket crazy Indian fans will realize finally that the heroes they worshipped were probably not thinking of them all the time.

Only history will tell, provided somebody dares to investigate and analyze with open frame of mind, whether Tendulkar served the Indian cause or damaged it more often.

It’s really deplorable that he has not been delivering in this period when he looked in the form of his lifetime. He had been scoring so freely and naturally in the 2011 World Cup until that century against South Africa.

What has happened since then? The form has not deserted him. Injuries have not bothered him. Then why has he not been able to score any century yet? Isn’t it a food of thought for the investigative cricket reporters? 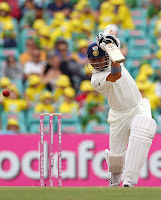 At a time when the likes of Virender Sehwag and Gautam Gambhir have lost their magical touch to tear apart the bowling, India needed real big knocks from their illustrious middle-order to pile up the runs.

Rahul Dravid, a team man to the core, delivered in England by scoring three Test centuries. What about Tendulkar. Didn’t he have a responsibility towards the team that has accorded him unstinted and unprecedented support?

He has deserted India yet again, this time in Australia when even Dravid has been unable to contribute significantly. With V V S Laxman and skipper Mahendra Singh Dhoni also struggling for runs, the Indians needed a double century or triple century from Tendulkar to stem the rot.
readmore »»